Pollution can have adverse effect on the lungs of children 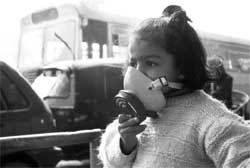 high levels of air pollution can drastically affect the growth and performance of children's lungs. This was revealed during a study done by researchers at the University of Southern California, usa. According to the researchers, residing in polluted areas is equivalent to smoking ( The American Journal of Respiratory and Critical Care Medicine , December 2001). They began their study by testing the lung function of several adolescents living in Southern California. They measured how much air the subjects expelled and how quickly they were able to do so. Five years later, the researchers retested 110 children who had migrated to other places such as Oregon, Nevada and Washington dc. They aimed to find whether moving to a less polluted area increases the ability of lungs to inhale and exhale larger quantities of air at a faster speed. The results were correlated with average annual exposure to particulate matter with a mean diameter of 10 micrometers.

The tests revealed that children who had moved to areas that were less polluted had better lung function. On the other hand, children who had relocated to places with high levels of particulate matter had a weak lung function. The decrease in lung function could be compared to the adverse changes brought about by smoking. These findings corroborate an earlier study done by the researchers, which showed that air pollution could have long-term effects on the lungs of children. "The study also shows that cleaning up the air actually has a measurable effect on children's health," says Edward Avol who headed the research. "Lung function is highest at the age of 20 and then declines slowly. What happens during the big growth spurt during the teen years is important later in life," he adds. The researchers propound that cleaning the environment would considerably reduce the threat of respiratory diseases.