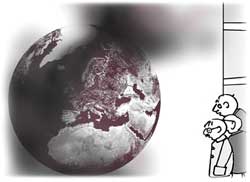 the Montreal Protocol may be doing wonders for healing the ozone layer over the poles, but it seems to have overlooked the problem in other places. According to a recent study, northern mid latitude stratospheric ozone levels will not recover to pre-1980 levels due to increasing levels of nitrous oxide (n2o) -- commonly known as the laughing gas. The study was conducted by researchers from Australia-based Commonwealth Scientific and Industrial Research Organisation (csiro).

The study indicates that ozone levels in mid-latitudes, which are currently an average of six per cent less than the 1980 levels, would recover a little, but will start falling again after 2040. "Because of rising n2o emissions, mid-latitude stratospheric ozone could be nine per cent lower by the end of the century than the 1980 levels," said Ian C Plumb, one of the researchers.

Scientists estimate that n2o lasts in the atmosphere for about 160 years. That makes its life span the second longest among all greenhouse gases -- after carbon dioxide that lasts for 250 years. The natural sources of n2o are oceans (22-28 per cent) and soil (46-55 per cent). Agricultural activities using chemical fertilisers contribute about 15-28 per cent of the n2o produced and burning of fossil fuels accounts for another two to four per cent.

To make their predictions, csiro researchers used a state-of-the-art atmospheric chemical transport model, which describes the large-scale transport of gases in the Earth's atmosphere and the chemical processes occurring from the surface to an altitude of about 80 km. They based their findings on the latest estimates for future emissions of compounds such as chlorofluorocarbons, n2o and methane.

The study indicates that most of the ozone depletion which has occurred over both the polar regions and at mid-to-high latitudes in both hemispheres to the present time has been caused by the rapid build-up of halogen-containing compounds in the atmosphere. The depletion has been most severe in the polar regions in spring. This has been a consequence of the halogen chemistry, whereby halogens are activated by low-temperature processes in winter.

Although ozone depletion has been most pronounced over the poles (the so-called 'ozone hole'), measurements have shown that depletion has also occurred at all latitudes outside the tropics. This is also mainly due to the halogen compounds. But as a result of the Montreal Protocol, concentrations of these gases in the atmosphere have now peaked and they are expected to slowly decay back to pre-1980 levels in the second half of this century. This would be in particular true for polar regions, because the combination of halogens and low temperatures has caused strong depletion there. Outside polar regions, ozone layer is expected to recover as halogen levels decline. However, n2o levels are rising and this will tend to reduce ozone at all latitudes outside the tropics. As a result, ozone will only partially recover, but will then decline, due to the increase of nitrogen-containing compounds.

More importantly, the study further states that the ozone levels at the end of the century will depend strongly on methane trends. According to Plumb, efforts to control global warming by reducing emissions of the greenhouse gas methane could make matters worse. This is because the breakdown of methane in the stratosphere creates ozone. So reducing emissions of this gas would be good for the climate, but bad for the ozone layer. According to Plumb, the reason why they focussed on northern mid-latitude ozone trends is because majority of the world's population lives there.

However, some researchers do not agree with the findings. One of them is Kalipada Chatterjee, manager of Global Environment Systems Group of Development Alternatives, a New Delhi-based non-governmental organisation. "There is nothing new in this study. Such studies are put forward to hand twist the developing countries which are already suffering due to the economic implications of the Montreal Protocol," he said.

According to him, such studies cannot be the basis for urging the developing countries to reduce their n2o missions. "These emissions are necessary for the survival of developing countries. By blaming ozone depletion on n2o, scientists from the North are tying to put their blame on the South." Chatterjee says that the mid-latitudes stratosphere ozone layer is depleting but not enough to be called an ozone hole.

Anumita Roychowdhury, head of air pollution control unit of Centre for Science and Environment, a New Delhi-based non-governmental organisation, says that the rising n2o emissions are a result of developed countries being trapped in a trade-off and therefore trying to cut down their emissions of other greenhouse gases. According to her, n2o is an emerging problem that needs to be tackled well, especially by the industry and transport sectors.