Nitrous oxide is steadily accumulating in the upper atmosphere, eating into the ozone layer and contributing to global warming 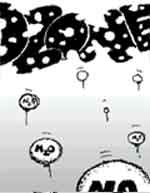 chlorofluorocarbons (cfcs) are not the only threat to the ozone layer. Nitrous oxide (n2o), also known as laughing gas, has been quietly eating into the layer that screens out harmful ultraviolet radiations. The gas has a tremendous global warming potential, with a heat absorption capacity 250-290 times that of carbon dioxide (co2). With world attention focused on cfcs and co2, the damage caused by n2o has gone unnoticed (see table: Warming over ).

Scientists have estimated that n2o lasts in the atmosphere for about 160 years. That makes its life span the second longest among greenhouse gases -- after co2, which lasts for 250 years. The natural sources of n2o are oceans (22-28 per cent) and soil (46-55 per cent). Agricultural activity using chemical fertilisers contributes about 15-28 per cent of the n2o produced, and burning of fossil fuel accounts for another 2-4 per cent. Increased use of fertilisers and production of leguminous crops, which fix atmospheric nitrogen, accent on livestock rearing, and burning of fossil fuel have led to doubling of n2o concentrations in recent years. Atmospheric n2o now stands at 310 parts per billion by volume (ppbv), and is increasing at an alarming rate of 2.5 to 4.5 million tonnes per year. The level of n2o is 0.75 ppbv higher in the Northern than in the Southern Hemisphere, indicating a greater strength of sources in the former.

The agents that assist these processes are chemosynthetic bacteria (such as Nitrosomonas , Nitrosolobus , Nitrosporia , Nitrosococcus , Nitrobacter and Nitrospina) found in the soil and marine environments. Some fungi also release n2o as a by-product during anaerobic respiration (where, in the absence of air, oxygen is derived from compounds). Non-biological processes that release n2o include anaerobic oxidation of organic matter by nitrous acid in soil. Soil acidity is a crucial factor in production of n2o -- the bacterial enzyme that reduces the gas to nitrogen operates best between p H 7.0 and p H 8.0. At a low p H, a lot of n2o is produced during denitrification.

Various other soil factors control generation of n2o, such as moisture, temperature, and presence of organic carbon and nitrogen compounds. Moisture limits the oxygen available below the soil surface. When moisture is added to low or moderate level soils, such as after irrigation or rainfall, denitrifying bacteria produce n2o rapidly. Though flooded soils favour nitrification, the amount of oxygen available is important: anaerobic conditions lead to production of nitrogen, rather than n2o as an end-product.

The proportion of organic carbon and nitrates and nitrites, as well as soil temperature affect the rate of denitrification. A temperature of 25c has been found to be ideal for denitrification. Deviations from this decreases bacterial activity. For nitrification, a range of 30-35c is optimum. In marine environments, temperatures range from 0c to 15c and have little influence on n2o production. Despite the numerous sources of n2o, the only known potential sink is photolysis -- the breaking up of n2o into nitrogen and oxygen in the stratosphere when exposed to strong light.

There is an urgent need to find options to control emission of n2o from agricultural activities. Split application of nitrogenous fertilisers seems to be the simplest method to contain n2o emission. Other methods include the use of nitrification inhibitors such as wax-coated calcium carbide that also reduces formation of methane (another greenhouse gas) from wetland rice cultivation. But such techniques are uncommonly used in Asia. Soil management during fallow periods -- allowing growth of weeds or another crop -- can also help in cycling nitrogen.