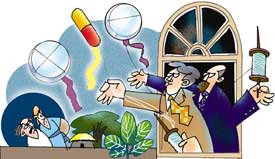 An effort to regulate drug prices, through measures "other than price control", has been wasted. A task force (tf) set up as per Supreme Court (sc) recommendations to find ways to reduce prices of life-saving drugs, could not come up with many viable solutions. The tf had representatives from the Planning Commission, Union ministry of health and family welfare (mohfw) and ministry of chemicals and fertilisers (mocf). It recently submitted its recommendations to mocf's department of chemicals and petrochemicals.

A major suggestion is to use the national list of essential medicines as a basis for selecting the drugs whose prices need to be regulated, not controlled. Though the existing Drug Price Control Order (dpco) of the mohfw puts out a list of drugs under price control, policy changes have cut down their numbers in the last few years. As per the Drug Policy, 1994, the list had 76 drugs. In February, the government announced the Pharmaceutical Policy, which, if implemented, would have brought the number down to around 30. To stop its implementation, a consumer filed a public interest petition in the sc. At present prices of 71 drugs are controlled.

As this control reduces profits for drug manufacturers, companies shy away from manufacturing these medicines. For drug manufacturers to accept the list, the tf suggested changes in the way drug prices were fixed. It said the ceiling price should not be based on the cost price of the raw material. Instead, the average price of the top three brands of the country should be used. But this could lead to a big leap in prices of medicines. An analysis in the Economic and Political Weekly (October 8, 2005), demonstrates this hike in price with the example of a 400-milligramme tablet of the anti-worm medicine albendazole. It says that if the average price of the top three companies were taken, one tablet of albendazole would cost about Rs 10.50. This is more than 2,900 per cent margin over the cost of the raw material, which comes to just 36 paise per tablet.

In the case of a new drug, the tf recommends that manufacturers introducing new medicines should submit intended entry price along with their applications for marketing approval. This could be difficult as the drugs controller general gives the marketing approval, while the mocf decides the prices . A lso, the tf suggested the price of the medicine should be negotiated at the stage of approval. But it failed to mention the authority responsible for this. It does not mention how these negotiations would comply with the T rade Related Intellectual Property Rights agreement regarding patented drugs.

The report also suggests that public sector undertakings (psus) involved in drugs manufacturing should be revived. These psus would provide medicines at cost price, effectively solving the problems of high price and non-availability. But this might not help in making patented drugs available.

Other recommendations include introduction of a new legislation called the Drug and Therapeutics (Regulation) Act and also establishing a National Authority on Drugs and Therapeutics as an independent regulatory agency. This would integrate the existing offices of the Drugs Controller General of India, Central Drugs Standard Control Organisation and the National Pharmaceutical Pricing Authority.

The mocf will study the report before submitting the final draft to the Union cabinet for its approval. A drug policy expert feels, "The report at least identifies the problems, even if solutions are not forthcoming. This is the first time a policy document has acknowledged the problem of overpriced medicines." But others hope that some changes will be made in the report. M D Nair, a consultant to the industry, feels a better way to regulate drug prices is to ensure multiple suppliers of the drug.