Researchers may soon develop onions that don't have tear-inducing chemicals 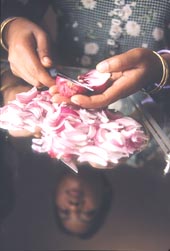 onions that taste as good as the original but do not have you weeping over the chopping board are now a possibility, say Japanese researchers. Researchers from the House Foods Corporation in Chiba, Japan, have identified the enzyme that releases a tear-duct-tickling chemical when an onion is cut. The compound, called propanthial s-oxide, is made by an enzyme known as lachrymatory-factor synthase.

According to the researchers, it would be simple to create an onion in which the enzyme is absent, or suppressed. Previous studies had suggested that onions' flavour compounds were behind the effect. Chopping was thought to make them react with a common onion enzyme, allinase, producing propanthial s-oxide. This suggested that in order to breed or genetically engineer a nonirritant onion, scientists would have to tamper with its flavour. However, onions free of allinase, like the Veri Sweet which was recently marketed in Washington State, had a characteristically different taste. Therefore, they were not well accepted. Even deletion of lachrymatory-factor synthase would cause the flavour to change a bit, as blocking the enzyme would lead to increased production of a flavour-related compound called thiosulphinate.