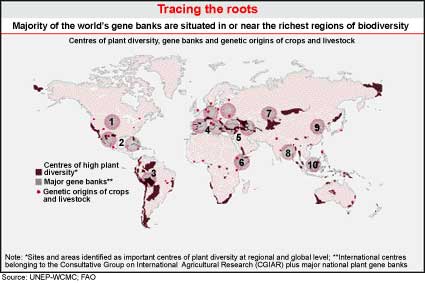 Looked at on a geological timescale, the planet's biodiversity has always been faced with threats of one form or another. But, at present, the threat is more pronounced than ever: species loss is said to be 27,000 every year. The main reason behind this loss is degrading natural habitats. An assessment of biodiversity data from 102 countries done by United Nations Environment Programme indicates that in the most densely populated 51 countries (averaging 168 people per square kilometre), 5.1 per cent of bird species and 3.7 per cent of plant species were threatened. On the other hand, in the 51 less populated countries (averaging 22 people per square kilometre), the proportions of threatened species were only half as high at 2.7 per cent and 1.8 per cent respectively.

Genetic origins of crops and livestock