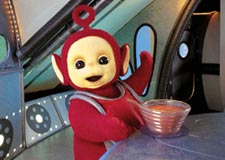 The British Broadcasting Corporation (bbc) has announced that it would phase out ties between its popular children's television characters and fatty snack foods. Fimbles shortcake, Teletubbies chocolate bars and Tweenies chocolate treats are to be replaced with healthier products, such as yogurt, dried fruit and shaped pasta. The bbc, largely funded by British taxpayers, licenses its children's television cartoon characters around the world for a variety of products, such as books and videos. Food depicting the characters is sold around the world. The phase out is to be over within two years as the current licenses expire.