No passage to Cuba 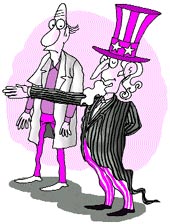 The us government in March announced it would ease restrictions on publication of papers from countries under a trade embargo, but almost in the same breath warned 50 us scientists from attending a conference in Cuba, says the journal Science (March 19, 2004, Vol 303 No 1742). For scientific cooperation among nations, this means one step ahead and two backwards.

The Department of Treasury's Office of Foreign Assets Control (ofac), which is responsible for enforcing trade sanctions against embargoed countries, had last September ruled that us publishers needed a government licence to "edit" submissions from Iran, Sudan, Libya, and Cuba. After protests from publishers, ofac said it would provide them with a "general licence".

But even as ofac relaxed this rule, its was threatening another type of scientific exchange. ofac wrote to us researchers planning to attend the 'Fourth international symposium on coma and death' in Havana that they risked "penalties" if they attended the March 9 to 12 meet without a "specific licence". All the scientists backed off.

Soon after, six us scientists cancelled their participation in the International Congress of the Cuban Society of Clinical Neurophysiology in Havana. Although travel to Cuba is restricted, us professionals don't need the government's nod to attend international meetings in that country. us scientists, who wanted to attend the coma conference, planned to travel under this provision, but were told that the meeting did not qualify for unlicenced travel because the primary sponsor was a Cuban body.

Scientists, who have attended three previous symposiums in Havana, were surprised. "I had no trouble attending those meets," says Stuart Youngner, a bioethicist at Case Western Reserve University in Cleveland, Ohio. "But this time I didn't want to go to jail."