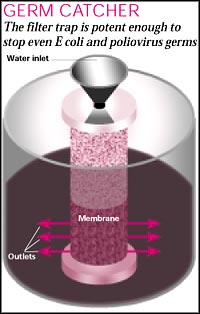 a team of Indian and us researchers has created a tiny filter, which is entirely made of carbon atoms and has several applications ranging from sieving out the minutest germs in drinking water to filtering unwanted hydrocarbons in petroleum products.

The cylindrical filter that has been prepared by the New York-based Rensselaer Polytechnic Institute (rpi) and India's Banaras Hindu University (bhu) is made of carbon nanotubes, which are very strong and can withstand high temperatures. But they are difficult to use because they are extremely small (see box: Small wonder)

Scientists led by Pulickel M Ajayan of rpi and O N Srivastava of bhu found a solution to the problem of the size of carbon nanotubes by devising a method to make large-scale structures. The researchers injected a solution of benzene and ferrocene -- materials needed to assemble carbon nanotubes -- into a stream of argon gas and then sprayed the entire mixture into a quartz tube located inside a furnace heated to 900c.

As a result of the spray, dense forest of carbon nanotubes formed on the inner walls of the quartz tube, yielding a hollow black cylinder several centimetres long and up to one centimetre in diameter. The researchers carefully removed the cylinder, which was now composed of trillions of nanotubes.

Each nanotube was only a few hundred microns long, essentially the thickness of the carbon cylinder's wall. "The research demonstrates how to spray well-ordered nanotube structures directly onto a substrate," says Ajayan, a professor of materials engineering at rpi and one of the authors of the article Carbon Nanotube Filters, which discusses the manufacture and application of such filters and will appear in the September 2004 issue of the journal Nature Materials. The next step was to find out how efficient the cylinder was as a filter.
For that, researchers sealed one end of the cylinder and flowed petroleum through the other. When petroleum passed through the cylinder's wall, its large and complex hydrocarbons were caught. This has potential commercial application, as separating heavier hydrocarbons from crude oil is an important step in purifying gasoline.

The high surface area of nanotube membranes, the cheaper cost of manufacturing them and the fact that they can be cleaned easily may make them competitive with ceramic- and polymer-based membranes used commercially, scientists say in the article. "This is indeed a significant work and will have immediate commercial applications," says Ajay Sood, physics professor at Indian Institute of Science, Bangalore, and an expert on carbon nanotubes.

T Pradeep, chemistry professor at the Chennai-based Indian Institute of Technology, agrees. "Filtration is one of the most simple problems that nanotubes can solve. But a cost effective and robust nanotube assembly was not available till now. This method probably solves that requirement," he says.

As the pore size of nanotubes can be modified, one can design filters for specific applications. He, however, warns that using nanotube filters on a large scale will be too expensive now; and that is why more research is needed.

Ajayan says his team plans to spray a great variety of nanotube structures directly on substrates. "This method provides a much better way of creating more interesting shapes and structures from nanotubes. By adjusting the size and flow of the nozzle, it is possible for us to define the geometric structure of the nanotube form."