No planet for apes 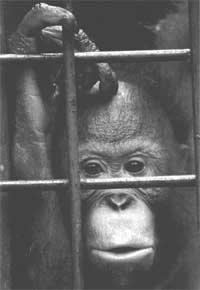 the unprecedented scale of forest fires in six provinces of Indonesia, which have been raging for the last four-five months, is taking a terrible toll on the wildlife of the region. The worst to suffer in this is orangutan, the endangered species of forest-dwelling anthropoid ape that is native to Sumatra and Borneo (the island shared by Indonesia, Malaysia and Brunei). A large number of orangutans have been fleeing their jungle homes as never before, driven away by the vast fires and choking smoke that have swept across the forests. By the hundreds, they are being killed by frightened villagers and plantation workers protecting their crops.

The confusion is also providing a business opportunity to those involved in illegal traffic of wild animals. Female orangutans are being killed so their babies can be taken to fuel the nefarious trade in young orangutans.More than 100 animals - some of them badly injured - have been rescued by conservationists from local traders and villagers who had locked them in cages in order to sell them off or keep them as pets. Most of these are young animals, who are yet to learn how to live on their own in the forest. It will take years of training to teach them the basics of survival that they would have learned from their mothers as a matter-of-course: how to build their nests in trees and how to feed themselves on the 400 varieties of fruit, bark and other things available in the forest that form their natural diet.

Stark as it is, the disaster of the fires has only worsened a crisis that is threatening the future of one of closest relatives of modern humans, said Barita Manullang, an orangutan expert with the Indonesian chapter of the World Wild Fund for Nature (wwf). "The orangutans are already under severe pressure from loss of habitat. Now the situation is much more critical. This is, I guess, the worst situation for the orangutan in this century," said Manullang. "Now, they really need to escape from the fires and the heat and also the haze, very thick haze," he added, pointing out that the smoke had also stunted the growth of jungle fruits, which will lead the animals to starvation in the coming year.

Until the haze and fires abated recently, other wild animals including elephants, Malayan sun bears and the flying foxes also fled, often to die at the hands of villagers. Most scientists estimate the present orangutan population at 20,000 to 30,000 animals in the wild, all of them on the islands of Sumatra and Borneo. The devastation of their habitat has accelerated sharply over the last decade as big logging companies have stripped the forests. The wwf estimates that their range has shrunk by more than 90 per cent over the last 50 years or so, along with a huge reduction in their numbers.

The fires have only quickened the destruction. "It's very scary," said Birute Galdikas, a Canadian who pioneered research on the orangutan. She has worked with the animals in the province of Central Kalimantan (the Indonesian part of Borneo) for 26 years. "We are looking at the demise of the orangutan as a species in the wild," she said. "It's a terrible situation, and unfortunately, it's not going to change. The illegal logging and clearing of trees for plantations are absolutely demolishing the forests," she added.

Orangutans are a fragile species, breeding slowly and demanding a wide range to forage for food. The males roam in the forests on their own, devouring huge quantities of fruits; the females raise the young in more settled territories, giving birth just once every eight years or so, then spending several years raising their offspring. It is against the law to own an orangutan in Indonesia, but the laws are widely flouted. Young orangutans are very attractive - wide-eyed, playful and trusting. Local people, particularly childless couples, often adopt them as members of the family.