No relief, only camps

About 150 families are staying in two relief camps in Kandhamal district of Orissa. There was no riot, earthquake or flood there. These people are victims of elephant terror.

A herd of 10 elephants strayed into the district from neighbouring Lakhari forests early this year. By now, it has killed eight people and destroyed about 500 houses, Kandhamal's collector Kishan Kumar said.

This is the first time a district administration in Orissa had to take such measures due to violent elephants. "We had to open camps because of fear among the people," Kumar said. The camps in Kirikutty and Simonbadi villages are sheltering people of Daringbadi and K Nuagaon blocks of the district. A 24-hour control room is also operating in Simonbadi.

Elephants have killed more than 180 people in the past five years, the state forest department said.With attacks increasing over the years, certain villages organized protests under a citizens' group called Hathi Upadrab Pratirodh Kriyanusthan Committee. This forced the authorities to track the herd's movement and keep it away from villages. The department dispatched a team of wildlife management officials from Bhubaneswar to Kandhamal in August and then in September. They organized seven squads of young villagers in Phulbani and Baliguda forest divisions.

The squads are armed with firecrackers, drums and high-focus lights to scare away the elephants. Villagers are advised to store paddy underground and destroy their stocks of mahua liquor that elephants like, Ramesh Chandra Sethi, divisional forest officer in Baliguda, said. The herd is now confined to the Sikoketa forest block in Daringbadi. 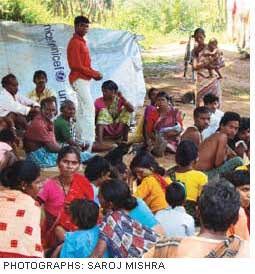 The people's committee termed the administration's efforts meaningless. "They are afraid of getting off their vehicles. What example can they set before the villagers?" asked Bhal Chandra Sarangi, advisor to the committee.

Incidents of elephants entering human settlements are neither new nor restricted to Kandhamal. Earlier this year elephants entered the campus of Berhampur University in Ganjam district. Elephants from Chandaka sanctuary close to Bhubaneswar often enter villages on the fringe of the city.

Such cases are increasing because industrial activities, mining for instance, are destroying elephant habitat, said Biswajit Mohanty, environmental activist and secretary of Wildlife Society of Orissa. An alumina refinery at Lanjigarh has obstructed the animal's migratory route from Kandhamal to Karlapat forests in Kalahandi via Niyamgiri, he said, adding, "A large number of trucks plying in the area have choked the migratory route."

Sethi agreed elephants were straying into human habitations more often, but blamed people encroaching their habitats. "In Kandhamal several villages are inside the forests, so where do elephants go?" he asked. Mohanty accused the government of failing to create ecologically sensitive areas around wildlife sanctuaries to prevent industrial and mining activity close to them.

The government's elephant management plan--involving mapping habitats and corridors--prepared eight months ago is yet to show results.