No respite for Odisha and Andhra from extreme rains, floods

Ongole town in Andhra receives 34 cm rains in one day; 68 people die in flood fury in two states. Raghuram Puvvada reports from Hyderabad and Ashis Senapati from Jagatsinghpur in Odisha 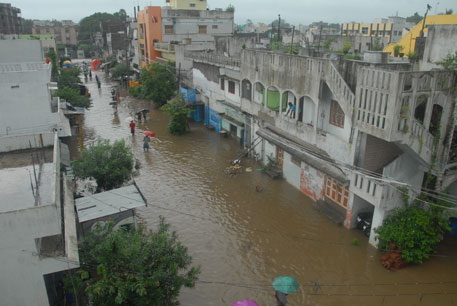 Still reeling under the impact of the trail of destruction left behind by cyclone Phailin, Andhra Pradesh is again suffering nature's fury. Immediately after Phailin, another low pressure system formed over the Bay of Bengal near Prakasam and Guntur districts in Andhra Pradesh.

The heavy rains that followed claimed 53 lives in the state and destroyed crops spread over 1,137,000 hectares (ha).

Meteorologists say the low pressure system was different from usual. It spread over land and over sea. The same kind of low pressure had formed in 1999 also and had caused heavy damage to the state. What was different this time was that the low pressure moved very slowly; and caused heavy rains in all the three regions of the state: coastal, Telangana and Rayalaseema. "This is a very rare kind of low pressure. It will not move much and causes very heavy rains. It happens because of some special conditions of weather over the sea," said Bhanu Kumar, former  head of department of meteorology and oceanography in Andhra University.

The state government was successful in minimising loss of lives during cyclone Phailin, but could do little to save lives during the current spell of rains and floods. The rainfall  was extreme in some districts. Ongole town in Prakasam district experienced 34 cm of rainfall in just 24 hours. Guntur also faced a lot of problem. Sixteen people lost their lives in these two districts; seven died in Nalgonda and six in Mahaboobnagar.

As many as 42,071 houses collapsed in the state and 220,245 people were evacuated from low lying areas. State government arranged 384 rehabilitation centres in rain-hit districts, especially in Srikakulam, Prakasam and Guntur districts. The rains affected 5,196 villages in 16 districts; 1,500 km of roads were severely damaged. As per state government's preliminary estimate, damages caused by floods cost Rs 3,756 crore.

Nineteen National Disaster Response Force (NDRF) teams were engaged in rescue and relief work. Eight teams of the Navy were also deployed in affected villages of Visakhapatnam district. According to the state disaster management department, 1,409 minor irrigation tanks have been breached.

State revenue, relief and rehabilitation minister N Raguveera Reddy said a comprehensive report on the damages would be sent to the Central government. The minister directed the district collectors to pay an ex-gratia of Rs1.5 lakh each to the families of the deceased. The kin of the victims above 18 years would be paid another Rs 50,000 under Apathbandhu scheme. The minister said new houses would be sanctioned under the next round of Racchabanda, a mass contact programme. He also promised that the government would suitably compensate farmers who lost their crops. 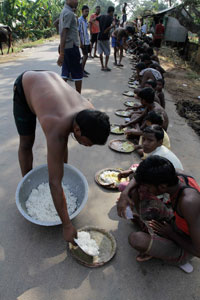 In neighbouring Odisha, 15 people have died in the incessant rains and floods that hit last week. Though flood waters have started receding in Kendrapada and Jajpur districts, the situation is still grave in Ganjam, Balesore, Bhadrak and Mayurbhanj districts.

But little relief is reaching people.

Anjali Nayak, 52, of village Kanarapur in Aul block in Kendrapada district in Odisha took refuge along with his two children in a neighbour's pucca house after her thatched house was damaged in the recent floods.  One of her sons, Saroj, 22, sustained serious head injury when flood water gushed into their house.

On Monday afternoon when everyone rushed to collect their house building assistance amount from visiting officials, Anjali received a jolt. “I was shocked to know that my name was not in the list of eligible people," said Anjali.

Like Anjali, thousands of flood-affected people have been overlooked by district authorities and face an uncertain future. 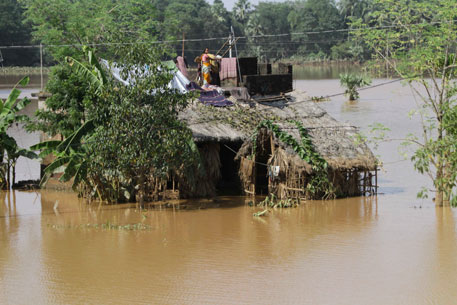 Babaji Jena of Srirampur village in Kendrapada district also lost his mud- wall with thatch house in the floods. “Our sarpanch assured I would get polythene covers last Thursday. But the authority is yet to provide me any relief material. I have covered my damaged house with torn clothes,” said Jena.

The situation is no different in Jajpur district. Bijaya Mallick (45) of village Bari works in Koraput. He returned last week to his flood-affected village. "I was shocked to see my damaged house as we never faced floods," said Mallick.

Now most of the flood-affected villagers feel trapped and helpless. "I need bamboos and straw to rebuild my thatched house. But the authority is yet to provide me any help," said Ranjan Mallick, resident of Dandisahi village in Kendrapada district. “We are unsure when normalcy would return,” said Gopal Samal a school teacher of Dandisahi. 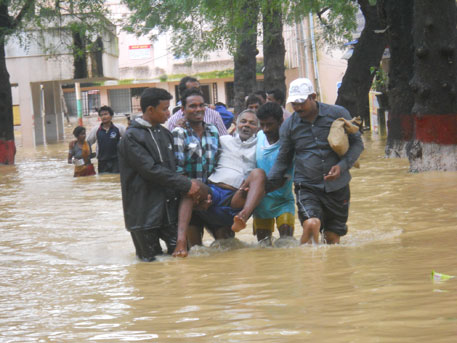 Baripada, the district headquarter of Mayurbhank, is still submerged in knee-deep water. Flood water entered the district government hospital and other offices in the city.
Odisha government claims it has been able to provide relief material to the four million flood-affected people. Visits to many affected villages in Ganjam, Puri, Kendrapada, Balesore, Bhadrak and Mayurbhanj, however, belies these claims. 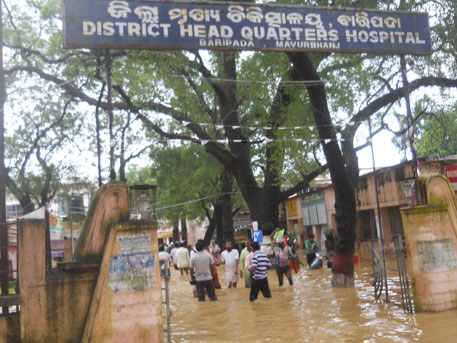 Pradipta Kumar Mohapatra, Odisha's special relief commissioner, said, “as many as 3,961,262 people have been affected in the floods; 407,307 houses were damaged and 150,511 ha of agricultural land damaged in the floods. Ninety-four blocks, 16 civic bodies, and 7,462 villages in Kendrapada, Jajpur, Kandhamal, Khordha, Mayurbhanj, Nayagard, Jagatsinghpur, Puri, Ganjam, Gajapati, Bhadrak and Balesore districts have been affected in this flood. The authorities rescued 191,000 flood affected people.”

Jayadev Jena, president of state unit Congress party alleged there are large-scale “irregularities in relief works. It is necessary to create public awareness about the administration's failures, but it is a herculean task to wake up the administration from its slumber.”