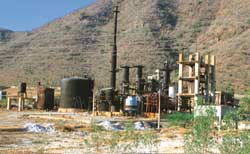 The Supreme Court of India recently asked the Union environment and forest secretary to explain the government's failure to implement its 1996 directive measures on sludge removal. These measures were to be implemented in and around eight units in the Bichhadi area of Udaipur.

The bench said the failure to implement the rule was a "serious lapse" on the part of the Centre and the Rajasthan government. It has directed the Union ministry of environment and forests to appoint an agency to look into the matter within two weeks and submit a report in this regard.

The direction came from a bench comprising justices Ruma Pal, B N Srikrishna and Dalbir Bhandari in response to a public interest petition filed by the Indian Council for Enviro-Legal Action, which is fighting a legal battle since 1989.

The court asked the sludge in and around Hindustan Agro Chemicals in Bichhadi village and seven other industries to be removed for which the industries are to give Rs 37.38 crore.