No rules for mining 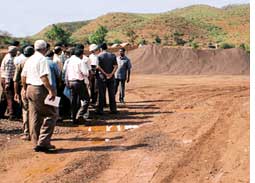 Report on mining irregularities in Karnataka is out

A mining company in Andhra Pradesh has extended its area and operations into Bellary district in Karnataka, said an investigation of mining irregularities in Karnataka. Karnataka's tourism minister owns the company. The investigation, commissioned by the state government to the lokayukta, a one-member grievance cell, found irregularities at all stages, from granting licences to exports. The lokayukta's report has recommended that the state ban iron ore exports.

The report revealed mining was rampant on land for which permission was not granted. Sometimes, revenue and forest officials did not check feasibility of the sites, but gave permission to mine. On several occasions, the sketch of the mining map shown to the department of mines and geology did not match with the site and overlapped forest areas.


"Officials of the mining and forest departments should visit areas to check if mining is going on as per the Indian Bureau of Mines's standards, but visits are made to collect bribes," said Santosh Hegde, the lokayukta. "In the 10 mines that we surveyed, more than 1,000 hectares (ha) of forestland were destroyed. Mining on more than 100 ha was illegal.'' There are numerous stockyards that store iron ore, without mandatory clearances, said the report released on December 18. The next stage involves transporting the iron ore.

The Shiradhi ghat on the Hassan-Mangalore route is an example. It was repaired in June last year at a cost of Rs 100 crore. It is damaged now because of frequent movement of heavy trucks. Officials of forest and mines and mineral departments should check this activity during loading, believed the lokayukta, and transport officers and police, en route. "If ore is transported from the forest area, forest officials give the entire permit book to transporters, which does not restrict the number of trips a vehicle can make," Hegde said.


The investigations also found that hillocks were flattened, waste dumped down hilltops, agriculture destroyed and water sources contaminated. In Sandur town in the district, mining dust had contaminated well water. Earlier, water flowed down the hillocks and fed the underground water system but now it picks up mining dust and forms puddles, the report said. Medicinal plants in Bellary too had disappeared.

Irregularities were found in the de-reservation of 2670.5 sq km of forest area in Shimoga, Chikmagalur, Hassan, Kolar, Chitradurga and Mysore districts. Private players cashed in on reserve forests for mining, said Hegde. "People are the worst affected. They do not enjoy any advantages from mining in their region. A development cess should be levied on mining, which should be used for the development of the areas mined," said Hegde.

Mysore Minerals Ltd (mml), a state unit, had suffered iron ore losses worth Rs 600-700 crore between 2000 and 2006. The company illegally subleased some of the best mineral bearing lands to private companies and entered into joint ventures where the partner company's balance sheet showed profits but mml did not get any dividend, said Hegde. He added that the state had suffered losses worth Rs 36,000 crore in three years because of illegal mining. "What is the point in exporting when you don't have profits?" asked Hegde. "I would suggest ban exports and even trading of iron ore within Karnataka."

The report alleged that former chief minister Dharam Singh permitted transportation of iron ore from patta (leased) land on the pretext that it was float ore, which needed to be removed for agriculture. Hegde found the ore was extracted without permits from cultivable land. The report recommended action against eight ias officers, most of them on mml's board, and former director, mines and geology departments for allowing mining on patta lands.