No safety in numbers 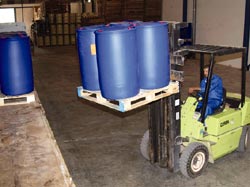 Between Latin America, Middle East and Asia, there are 20,000 tonnes of pesticide poisons waiting to be treated. But the United Nations Food and Agricultural Organization (fao), which helps clear-up pesticide waste in developing countries, claims that it is running out of cash to tackle the chemical stockpiles. "We are the only ones who run a programme to deal with obsolete pesticides, and we will not be able to support countries (beyond Africa) to deal with this problem after the end of this year," said Mark Davis, head of fao's programme on the Prevention and Disposal of Obsolete Pesticides. World Health Organization estimates that pesticides poison three million people every year, and kill 200,000 -- most of them from the developing world. Safe disposal costs around us $3,500 per tonne, but most developing nations lack the facilities to destroy or even safely store stockpiles.