No space for dissent 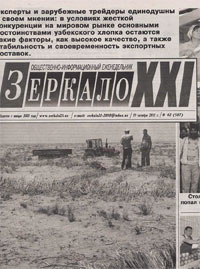 A prominent Uzbek newspaper has suspended publication. Bakhodyr Yuldashev, the chief editor of the Russian-language Zerkalo XXI (Mirror XXI), told news agency Radio Free Europe the paper stopped publishing due to financial difficulties. But he also hinted that government pressure was among the reasons for the newspaper’s going off stands. “Any of our readers can confirm that we have had tonnes of critical reports. And no one likes criticism,” he says.

A Zerkalo employee who spoke to Radio Free Europe on condition of anonymity said the newspaper had problems with the state licensing committee for publishing several advertisements that the committee said were “illegal”. He added that he thinks this may be the reason for the publication’s closure.

Most media units in Uzbekistan are either fully owned and controlled by the government or carefully monitored and censored by it. In the past two years authorities have shut down all relatively independent newspapers such as Odamlar Orasida, Munosabat and Mohiyat. Financial difficulties were cited as the immediate reason and all the papers were charged with violating procedures for publishing advertisements.