No wood, no pests 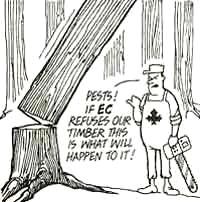 IN A BID to protect its forests from a voracious, microscopic pest called the pinewood nematode, the European Community (EC) has banned imports of untreated softwood lumber from Canada.

The ban affects the bulk of Canada's $388.50 million yearly export of untreated lumber to EC states. Now all Canadian lumber exports to Europe, except for cedar, must be kiln-dried or heat-treated to protect it from the nematode, which has destroyed large tracts of pine forest in Japan.

Angry Canadian officials say the EC is endangering the livelihood of many workers in the provinces of Nova Scotia, New Brunswick and British Columbia. They concede, however, that pine exports should be heat-treated or kiln-dried.