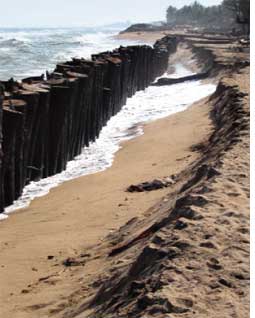 SCIENTISTS from around the world who met in Copenhagen, Denmark, from March 10 to 12, suggested sea level increase due to global warming could be more than the earlier projections. There is worse news. Forests may not be effective carbon sinks that can save the planet from the negative impacts of temperature rise as they would not be able to absorb any more CO2.

These and other findings that project higher intensity impacts of climate change were presented by scientists at a three-day conference--the International Scientific Congress on Climate Change. Organized by University of Copenhagen, it was attended by 2,500 scientists from 80 countries. It is seen as an update on the science of global warming ahead of the UN's climate change summit-- cop15-- in Copenhagen this December.

Those who presented their studies agreed with temperature rise projections made by the Intergovernmental Panel on Climate Change (ipcc)-- the scientific body set up to evaluate risks from climate change--whose projections are accepted as the basis for international negotiations. But the scientists disagreed with ipcc's predictions on sea level rise.

A study by Aslak Grinsted, researcher with University of Copenhagen, said the average increase in sea level by 2100, would be between 0.9 and 1.3 metre if temperature increases between 1.7C and 4.4C. The ipcc figures are lower. In its latest report of 2007, it projected a sea level rise of 0.18 to 0.59 metres by 2100. This would mean more land would go under sea than predicted.

The lower range predicted by ipcc could be because it did not account for contribution from land ice. It only accounted for sea level rise when warming expands ocean water. ipcc's prediction was based on incomplete knowledge of glacier melt which ipcc also acknowledges. The new predictions are based on new methods of determining ice melt and also relatively fresh data that shows higher rate of ice melt. "Existing mathematical models for climate change predictions cannot factor in ice melt well enough and do not provide a useful basis for a projection," said Christopher Field, co-chair of ipcc's working group that assesses climate change impacts.

Field who attended the conference, however, does not see the new findings contradicting ipcc. He views it as an update on ipcc projections. He said the ipcc's 2007 assessment (based on data updated till 2005) did say loss of ice is likely and there is need for new science in this area. "Such estimates (as the ones presented at the conference) are expected from representation of increased melting of land ice," said Field.

Scientists at the conference used new mathematical models and past data for their projections. Jonathan Bamber from University of Bristol said sea level would rise by one metre owing to 15 per cent loss of ice cover. Another study suggested methane emissions from soil trapped under permafrost, when ice melts, would be 1.7 trillion tonnes, more than twice the ipcc estimate.

Yet another study questioned the ability of forests to absorb carbon emissions. The study said increase in temperature in tropical and sub-tropical regions would cause trees to lose carbon as their ability to absorb CO2 through photosynthesis has peaked and can only decline now. If validated, this study could make UN's programme for reducing emissions by conserving forests, redd, redundant. A recent study published in the journal Proceedings of National Academy of Sciences has added to the list of predictions. It said the seawater will become more acidic due to drop in pH level by 0.7. This would damage marine ecology.

"There is no excuse not to act now," the conference concluded and called for drastic emissions cuts. Delay in mitigation measures will increase social and economic costs of adaptation, the conference concluded. Ambuj Sagar, professor of technology and policy, iit- Delhi, said ipcc reports are made through consensus, take time, and so become outdated. Hence, mitigation action must be taken now.

Pradipto Ghosh, one of India's negotiators for climate change, said the findings could be treated as credible only if "validated by more studies and the ipcc". The findings focus on emissions from natural sources like defrosting and deforestation but not industrial emissions for which the developed countries have highest responsibility. "This (the new predictions) would divert attention from industrial emissions which should be the top priority. The industrialized countries have not cut their emissions as per Kyoto protocol," pointed out Ghosh.

Sagar said the Danish government is desperate to broker a deal in December where the US may get pushed to take on drastic emission cuts. The US in turn is likely to push for higher emissions cuts by emerging economies such as India, China and Brazil. The findings of the conference were presented to the Danish prime minister who will host cop 15. Whether these findings will influence negotiations will be known in December.