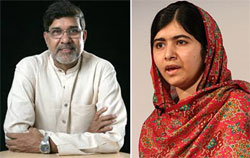 Indian child rights activist Kailash Satyarthi and Pakistan’s Malala Yousafzay will share the Nobel Peace Prize for 2014, for their struggle against the suppression of child rights and for the right of all children to education.

Born in 1954 in Vidisha, Madhya Pradesh, Satyarthi founded two significant civil society movements, the Global March against Child Labour and Global Campaign for Education. He has led various peaceful protests and demonstrations, focusing on the exploitation of children for financial gains. He has also contributed to the development of international conventions on children’s rights. According to rough estimates, Satyarthi has rescued more than 67,000 child slaves in South Asia.

Seventeen-year-old Malala Yousafzay began campaigning for girls’ right to education despite the threat from local Taliban forces in her home town in northwest Pakistan. She survived a brazen attempt on her life while on her way to school in 2012. Following her recovery, Malala has continued to campaign for girls’ right to education around the world and has emerged as its foremost spokesperson.

While announcing the names of the winners, the Nobel Peace committee stated that children must go to school and that they must not be financially exploited. Sixty per cent of the population in poor countries is under 25 years of age and safeguarding their rights is a prerequisite for peaceful global development.