Noisy and smoky Diwali this year 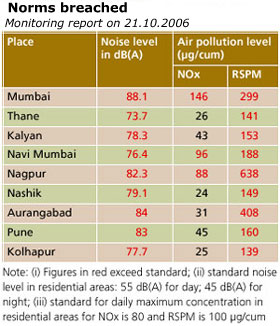 MAHARASHTRA Pollution Control Board recently released a collated report on air and noise pollution during the three days of Diwali celebrations (October 21, 23 and 24) this year. The noise level was monitored at 115 locations in 12 cities and ambient air quality at 15 locations in nine cities across the state.

The Report on Monitoring of Noise and Air Pollution during Diwali, 2006, says noise levels exceeded the permissible limits in all cities and fire crackers added to increased levels of air pollution, particularly in terms of nitrogen oxides (nox) and respirable suspended particulate matter (rspm). In Mumbai and the Mumbai metropolitan region, readings exceeded last year's figure.