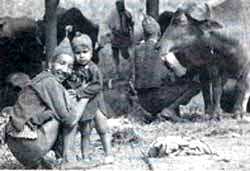 Chief Election Commissioner T N Seshan has sent a missive to district administrations instructing them to register various communities which hitherto had been left out of electoral and census lists on account of their "nomadic practices". By mid-November, the first exercise under this programme bore fruit when nearly 15,000 Van Gujjars in the Uttar Pradesh hills were registered as voters in the Hardwar, Saharanpur, Dehradun and Garhwal districts of the state.

The measure followed urgings by the Dehradun-based Rural Litigation and Entitlement Kendra (RLEK), which has been prominent in publicising the erosion of the traditional rights of Gujjars over common property resources in various parts of the UP hills, particularly in the Rajaji National Park.

Says RLEK chairperson Avdesh Kaushal, "The enfranchisement of the Gujjars will ensure that their problems are no longer dismissed from the stage of the region's politics." The RLEK has also been authorised to carry out a special voters' education programme among the Gujjars.