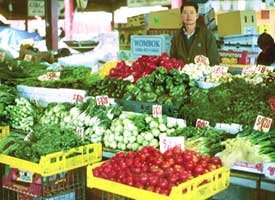 Under pressure from farmers, Australia is set to adopt new labelling laws that facilitate distinguishing between Australian and "imported" food. Food products with less than 85 per cent Australian-grown content are to be branded "imported". Food Standards Australia New Zealand was all set to release the new draft standards, including the requirement of a clear "imported" label, instead of the details of the country of origin being hidden among suppliers' or manufacturers' details on the packaging.

"We will get country of origin labelling on unpackaged food, we will get clearer and more distinct labelling that's more truthful and obvious on packaged food," Australia's federal agriculture minister Peter McGauran told a farmers' rally on August 11, 2005. The rally had reached the parliament house after a month-long protest trip through many states. McGauran also promised us$2.3 million aid to vegetable growers, some of whom expressed dissatisfaction about the aid amount.

The move has the backing of other federal ministers and states, led by Tasmania's premier Paul Lennon. Lennon had recently told a rally of farmers that "shonky labelling scams" were harming Tasmania's us $135.3 million vegetable industry.