Non-communicable diseases: most nations way off meeting targets, says WHO 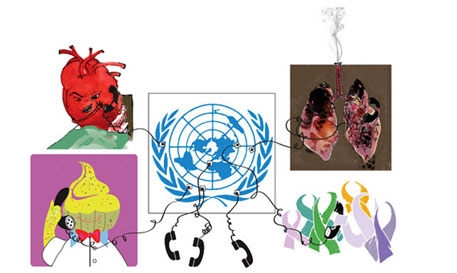 Nearly 16 million people die prematurely, before the age of 70, every year due to non-communicable diseases (NCDs), even though an investment of just US $ 13 per person per year can save their lives. Urgent government action is needed to meet global targets to reduce the burden of NCDs that range from heart and lung diseases, stroke, cancer and diabetes, according to a new World Health Organization (WHO) report.

“In 2015, every country needs to set national targets and implement cost-effective actions. If they do not, millions of lives will continue to be lost too soon,” said WHO Director-General Margaret Chan, who on Monday launched the Global status report on noncommunicable diseases 2014.

Nearly five years into the global effort to reduce premature deaths from NCDs by 25 per cent by 2025, the report gives recommendations about actions by governments. Premature NCD deaths can be significantly reduced through government policies which reduce tobacco use, harmful use of alcohol, unhealthy diets and physical inactivity, and delivering universal health care. Almost three quarters of all NCD deaths (28 million), and 82 per cent of the 16 million premature deaths, occur in low- and middle-income countries.

The report released on Monday provides examples of most cost-effective and high-impact interventions by various nations.

The report notes that most of the countries are off the course to meet the 2025 targets. While 167 countries have operational NCD units in the ministry of health, progress on other indicators has been slow, especially in low- and middle-income countries (see ‘Progress report of countries’).

From 2011-2025, cumulative economic losses due to NCDs without any intervention in low- and middle-income countries is estimated at US$ 7 trillion. WHO estimates the cost of reducing the global NCD burden is US$ 11.2 billion a year, an annual investment of US$ 1-3 per capita.

Target 2
At least 10 per cent relative reduction in the harmful use of alcohol, as appropriate, within the national context

Target 7
Halt the rise in diabetes and obesity

Target 9
An 80 per cent availability of the affordable basic technologies and essential medicines, including generics, required to treat major NCDs in both public and private facilities