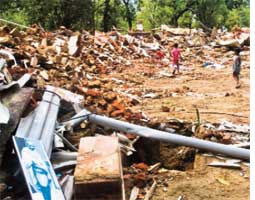 For its stand against Salwa Judum in Chhattisgarh

a non-profit in Chhattisgarh that has been vocal about human rights abuse by Salwa Judum became the target of the Dantewada district administration's demolition squad on May 17. Salwa Judum is a civilian militia backed by the state bjp government to fight Maoists.

Bulldozers moved into the Vanvasi Chetna Ashram spread over 2.8 hectares early in the morning. All 15 buildings in the complex including staff quarters were knocked down. About 500 police personnel accompanied the demolition squad. Visitors to the ashram including research scholars were reportedly manhandled and detained for several hours.

The district administration described the demolition as a "routine anti-encroachment drive". "The organization was asked to vacate the premises in 2007.It did not seek stay against the notice, so we removed the encroachment," district magistrate S P Shori said. The non-profit said it was a case of vindictive action. Land records with the ashram show it was built on farmland in 1993 with gram sabha approval. It was served notice to vacate the land in 2007 after it started working against Salwa Judum. "We were told the status of the land had been changed to shrub forestland in 1996 but the administration was unable to furnish supporting documents," Himanshu Kumar, president of the non-profit, said. Then it moved the court, which asked the administration to respond by June 17. But a month before the hearing date, officials demolished the ashram, Kumar said.