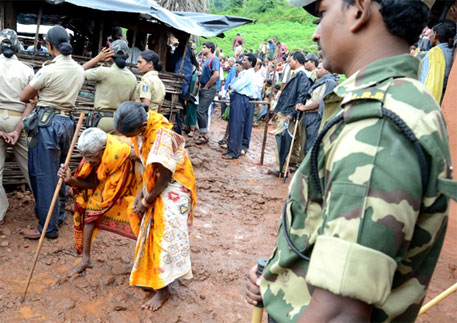 In a repeat of the previous two palli sabha decisions, the non-tribal forest hamlet of Tadijhola unanimously rejected proposed bauxite mining in the Niyamgiri hills today.

Nineteen of the 22 voters in the village were present at the palli sabha or village council meeting, including eighty-seven year old Sugri Gouda. Hard of hearing and barely able to stand on her own, she insisted on signing the resolution before leaving the meeting venue. Three bare words she uttered drew a cheer from those present: "Niyamgiri dibu nai" (won’t give up Niyamgiri). Gauda was the also most sought after by media, with a slew of video cameras following her fragile steps as a family member walked her home.

Tadijhola, a forest hamlet in Kalahandi district of Odisha, is deep inside the Niyamgiri hill range and has no road access. The district judge, Pramod Kumar Jena, appointed observer to the proceedings by the Supreme Court, had to trek the last few miles to reach the village.

The palli sabha decision was keenly awaited as it was the only non-tribal forest village populated by the Goudas, traditional cattle rearers, living among Dongria Kondh tribals who are fiercely protective of their forest territory. Although the Dongria Kondhs did not have a say at today’s meeting, about 200 of them stood outside the meeting tent, shoulder to shoulder with the Central paramilitary forces. 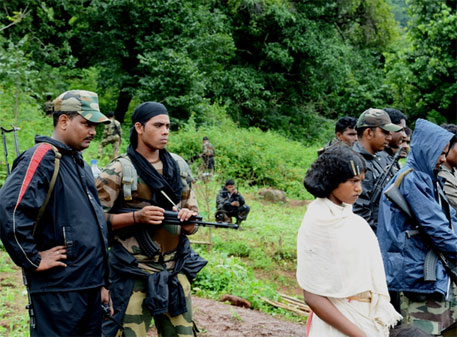 Following up on the Supreme Court order of April 18, the Odisha state government selected 12 villages—seven from Rayagada and five from Kalahandi district—to take a call on the proposed bauxite mining inside Niyamgiri hill range and whether it will infringe on their religious and cultural rights. A joint venture of the Orissa Mining Corporation Limited (OMCL) and Sterlite Industries, the Indian arm of the London Stock Exchange-listed Vedanta, wants to mine the forests for bauxite, to feed Vedanta’s alumina refinery on the foothills of Niyamgiri hills at Lanjigarh.

“Why have you braved the rains, the mud and slush and climbed uphill to come all the way here today?” asked a spirited Rameswar Gouda before reminding, “I have never studied in a school, never been to a hospital and is alive today only because of these forests and streams.”

Jamu Gouda, asserting his right to worship the Niyamgiris said, “if you plan mining here, the rivers of Nagaveli and Vamsadhara (originating in the hills) will flow with our blood.” Gajendra Gouda took a dig at Vedanta: “We have lived here for hundreds of years. We are happy in our mud huts and don’t need brick houses. Vedanta can go back to London and mine there.”

At the end of the meeting, villagers insisted that district judge Jena should sign before they did. It took some cajoling by activists and panchayat officials before residents understood the procedure that Jena is an observer, not a participant. The mistrust runs deep, Gajendra Gouda told me before I left the village: “in the final copy they did not write about hospitals and schools. The never write our words exactly?”