The proposal for setting up a Commission for Sustainable Development, considered one of Rio's successes, is already caught in a dispute over size, composition and status. 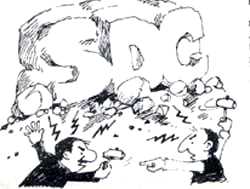 THE PROPOSED establishment of the Commission for Sustainable Development (SDC), hailed as "one of the quiet victories" of the Rio conference, is becoming a source of North-South contention that is expected to peak at the 47th session of the UN General Assembly in New York. Among the issues to be decided are the commission's mandate, its size and composition, its headquarters and its status within the UN hierarchy.

Setting up a body of experts to advise the Secretary-General on environment and development issues has also met with much opposition from the developing world. Minister of state for environment Kamal Nath, one of the 10 ministers of environment called to address the General Assembly, said India is against any "institutionalised advisory council above the proposed Commission." Spokespersons for many developing countries sharing this view, warned such an advisory body would be used by developed countries to veto Commission recommendations.

On the issue of the extent to which SDC could intervene in national development policies, Kamal Nath said, "The work of the proposed SDC would not be meaningful, or even acceptable, if it strayed into areas that are essentially national concerns and are not relevant to international cooperation."


On the other hand, US environmental protection agency director William Reilly urged that the SDC should not exercise "coercive power, (but) should use moral authority to remind the world and the countries as appropriate of the strengths and weaknesses of policies, priorities and projects."

The commission, as recommended in UNCED's Agenda 21, the blueprint for sustainable development agreed to in Rio earlier this year, would monitor the programme's implementation and report to the UN Economic and Social Council (ECOSOC).

While the Secretary-General and Japan are keen that SDC headquarters should be in New York, Switzerland and the US want it to be based in Geneva, where most UN development agencies are located, and Germany is lobbying for Bonn.

The SDC issue has become entangled with UN restructuring proposals being evolved by a high-level group, including Indian economist I G Patel. The confidential interim report, submitted in late October, suggests two major bodies to be set up under ECOSOC. One would be SDC, to deal "with policy issues in the multi-dimensional field of sustainable development as envisaged at UNCED and set out in Agenda 21". The other, the International Development Council (IDC), would oversee all "operational programmes and activities to give effect to priorities emanating from the intergovernmental discussions".

The interim report suggests member-states' ministers responsible for international development should meet in groups "small in size, for example, 20 to 24 members, representing different constituencies of states, possibly with rotation."

It states that in order to ensure participation by as many governments as possible, members of SDC should not sit also on IDC, and those not on either should be named to review panels. Membership of the high-level advisory board "should consist of eminent persons in different disciplines that relate to sustainable development."

The report urged that "all existing economic, social and environmental entities within the UN Secretariat, irrespective of where they are located, should be constituted into a Directorate of Economic, Social and Environmental Affairs, which would be headed by a "professional of eminence in the development field" who would be named by the Secretary-General.

It is still uncertain whether the Secretary-General will accept the panel's recommendations. They have, however, received a rather critical reception, with most developing countries still unsure of how strong an SDC they want, because the North's track record hitherto has been of consistent neglect and non-commitment to development issues concerning the South. The next two months will require developing countries to develop concerted strength to heighten their bargaining power.