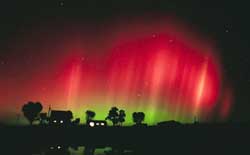 If Earth's North Magnetic Pole continues to move at its present rate, Alaska may lose within 50 years one of its most stunning natural phenomena -- the Northern Lights, claims a US study.

The North Magnetic Pole has moved almost 1,100 kilometres out into the Arctic Ocean during the last century. But the surprisingly rapid movement of the magnetic pole doesn't necessarily mean that our planet is going through a large-scale change that would result in the reversal of the Earth's magnetic field, says Oregon State University paleomagnetist Joseph Stoner. The finding was reported at the American Geophysical Union's recent meeting in California.

Stoner and colleagues studied the sediment record from several Arctic lakes. These sediments -- magnetic particles called magnetite -- record the Earth's magnetic field at the time they were deposited and can be used to track changes in the magnetic field.

The Northern Lights, which are triggered by the Sun and fixed in position by the magnetic field, drift with the movement of the North Magnetic Pole and may soon be visible in more southerly parts of Siberia and Europe -- and less so in northern Canada and Alaska.