Not a bad fad

The US takes to hybrid vehicles in a big way 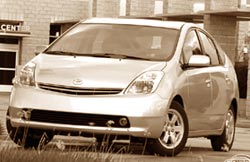 rising petroleum prices have pushed consumers in the us towards eco-friendly hybrid vehicles that combine petroleum and battery powered electric motors. The registration of these vehicles in the country witnessed a 25.8 per cent increase from 2002 last year at 43,435. The Honda Civic hybrid accounted for 50 per cent of all registrations at 21,750. Toyota Prius, which got 47 per cent of the market share, registered 20,387 vehicles, while Honda Insight sold the remaining three per cent, according to the R L Polk & Company, which collects and interprets automotive information.

The government also promotes the sale of hybrid vehicles. Many states have devised tax break plans to give a boost to the technology. Currently, there is a Federal Tax Deduction of us $1,500 for the purchase of a qualifying hybrid. Connecticut, Colorado, New York, Maryland, Oregon and Pennsylvania provide additional incentives. California registered the maximum number of such vehicles at 11,425, followed by Virginia at 3,376, Florida at 1,196 and Washington at 1,172. Virginia has even allowed the use of High Occupancy Vehicle Lane -- the extreme left and fastest lane used only by vehicles with three or more occupants during rush hours -- for a qualifying hybrid vehicle with even a single occupant, says Sam Butto, Toyota Product Communications representative.

The industry, however, has mixed opinions about the government's role in increasing the sales of the vehicles. Butto believes petrol prices and government laws are just additional factors. The main reason is product improvement and increase in awareness and understanding of hybrid technology, press coverage and support from opinion leaders, he claims. But Bill Ford, chairman of the automobile company Ford, recently acknowledged the government's role when he demanded more tax breaks and suggested that taxes on petroleum should be raised to spur consumer interest in hybrids. What manufacturers seem to agree about is cashing the current trend. Many of them have planned a number of new vehicles for the coming year, indicating further rise in sales. In a separate development, Toyota joined hands with China's First Automotive Works to manufacture and sell Prius in the Asian nation. These vehicles would be sold in China's domestic market only.