Not all died of poisoning 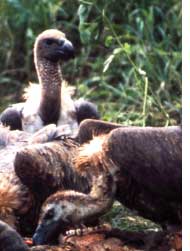 diclofenac poisoning may not be the sole cause for the drastic decline of vulture populations in central and south India. A two-year long study says avian malaria had a part to play as well.

The population of the Indian white-backed vulture (Gyps bengalensis) suffered a decline of over 95 per cent between 1988 and 1999, making them critically endangered. It was found that the indiscriminate use of diclofenac, an anti-inflammatory veterinary drug, caused it to be concentrated in the bodies of the vultures that fed on dead animals. Death was due to renal failure, a known side-effect of the drug.

The study was conducted in Gadchiroli district of Maharashtra where farmers had no resources to purchase or use diclofenac. Between 2004 and 2006, a hundred vultures inhabiting 48 nests spread across 11 villages were monitored. Examination of blood smears taken from dead vultures revealed the presence of Plasmodium sp AP70. This causes avian malaria. Two live but sick birds were also found displaying malarial symptoms. These birds were administered anti-malarial drugs which led to full recovery. No diclofenac residues were found in them.

"Though the study was carried out only in one district, it is possible the decline of vultures in other parts of India where diclofenac is not used may be due to malaria," said S Shivaji from the Centre for Cellular and Molecular Biology who led the study. He added that Gadchiroli district is poverty-stricken and lack of food and water compromises the vultures' immune systems.

Vultures are important scavengers. They get rid of animal carcasses and curtail the spread of diseases. Owing to the critically endangered status of these birds, the potential of Plasmodium sp as a mortality factor needs to be explored.