Not guilty for a change

Global warming is not responsible for Africa's upsurge of malaria 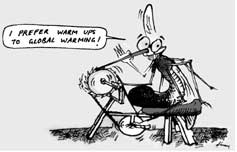 global warming is unquestionably responsible for causing numerous adverse environmental changes, but it is certainly not to be blamed for the recent upsurge of malaria cases in East African highlands. This claim was recently made by researchers from the uk -based Oxford University. According to them, drug resistance or the failure of the health-care system to keep pace with population growth are the real culprits (www.nature.com , February 26, 2002).

It is commonly known that malaria in highland areas is hindered by low temperature, as it limits the development of the disease parasite. Therefore, the rise of malaria cases in these areas was but naturally blamed on increasing temperatures, with little research being done to confirm this. However, zoologists at Oxford did not find such explanation very convincing and, therefore, they set out to investigate long-term meteorological trends in four upland sites of the region, where increases in malaria had been reported in the past two decades. Examining mean temperature, rainfall and vapour pressure data from January 1911 to December 1995, the researchers found that there was no correspondence between climate trends over the last century and the past two decades of malaria resurgence. "The climate of the regions did not change much during the years examined. Therefore, it cannot be responsible for changes in the malaria incidences," said Simon Hay, one of the researchers.

Even Paul Reiter, an expert in insect-borne diseases at the Massachusetts-based Harvard School of Public Health, agrees with the findings. He opines that linking climate changes with the disease is a result of an unseemly rush. Hay and Reiter add that even in temperate regions, global warming is unlikely to increase the threat of malaria. They further point out that the disease was present in Europe and North America until the second half of the twentieth century, until factors such as draining of wetlands and improved public hygiene eliminated it. "We hope these findings will help focus attention back to the real and immediate problem of anti-malarial drug resistance, rather than potential future problems that climate change may bring," said Hay.

However, some experts disagree with the conclusions of the research. One of them is Jonathan Patz from Johns Hopkins University in Baltimore, usa. According to him, to make such claims what is needed are studies that consider climate, disease statistics and social factors simultaneously.