Not in my backyard

Delhi, reduced to a gas chamber due to the proliferation of highly polluting industries, now requires the social and political will to enforce an effective relocation 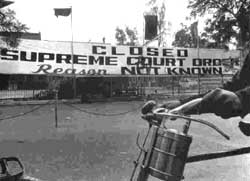 NOVEMBER 29, 1996, the residents of Delhi were, as usual, cohabiting with a smoke-filled sky and toxic wastes in water and food. December I saw the same standards. On the face of it, nothing really seems to have changed. Even following the Supreme Court (SC) verdict that after November 30, 1996, all polluting industries must move out of Delhi to other places in the National Capital Region (NCR), the people of Delhi lived resigned to the cauldron of seething pollution.

In all, 168 units were shut down, among them 22 stone crusheries, the Idgah abbatoir, and several rubber and metal recycling units located in the congested colonies of Delhi, identified as heavily polluting and hazardous.

Some section of the industry lobby found the move positive. S K Jain, consultant with the environment cell of the Confederation of Indian Industry (CII), while welcoming the development, agreed that at present the focus should be on what technological options the relocated industries are likely to adopt. According to him, the SC order would definitely "shake the errant units and enforcement agencies out of their sluggishness". One look at the statistics proves that the shifting of 168 industries is only a mild warning to the massive cleaning up of the environment of the capital city that demands a long-term plan and stringent enforcement. Factory units in Delhi - numbering nearly a lakh - contribute to about 20 per cent of the city's pollution.

But industry accounts for nearly one-third of the revenue earned by the capital city of Delhi. But among 93,000 units, only 10,000 have the necessary clearance from the Central Pollution- Control Board (CPCB). In actuality, only 3 1,000 have licenses from the Municipal Corporation of Delhi (MCD).

There have been several efforts now and then by the authorities to conduct checks on smaller polluting units, which really did not create much flutter. In fact, the only effort that made some impact was the setting up of the NCR Planning Board in April 1994, to coordinate the task of relocation of industries. But the total number of industries in Delhi had already touched 93,000 in 1994 from 81,000 in 1990,(Down To Earth, Vol 3, No 1). And experts admit that the task is mammoth. Soli Sorabjee, former attorney general of India, while speaking at a recent national workshop on legal regulations of hazardous substances in New Delhi, said, "Action against erring industries is fine, but all this requires social and Political will, especially as the shifting of industries have several social and other consequences.

The problem is that despite there being two drafts of the Delhi master pian (MPD), formulated in 1962 and 100, which has spelt out clearly that Delhi should remain a 'non-pollution zone', the advantages of operating in the NCR is manifold. For the factories, the economics works out to be much cheaper in Delhi with less erratic power supply, readily available transportation, cheap skilled as well as unskilled labour and an expanding, thriving market than anywhere else in the NCR.

Of these 93,000 units, majority function on a shoestring budget. To cut corners and increase profits, all kinds of subterfuges are brought into play. This include using waste rubber as fuel and recycling plastic and lead, despite there being reports in the past of toxic after- maths in Delhi's congested industrialised colonies (Down To Earth, Vol 3, No 14). And surprisingly, the environment protection act does not lay down any strict regulation to check hazards originating from such units.

The only solution seems to lie with the environment-friendly technological options after the factories are relocated. Says Jain, "There has to be a clear tilt towards clean technology which is resource - efficient and low waste- generating. The present norms and the new ones to be adopted should be extensively compared from unit to unit." He informed that the CII had set up a technology information cell (TIC) in November 1995, to promote cleaner technologies. Emphasising that the TIC has been working in collaboration with several other nodal agencies in the country, Jain said, "Basically, it is the resource consumption norms followed by the factories that we are aiming to standardise."

In 1990, Maneka Gandhi, former Union environment and forests minister, had initiated a 'door-to-door' survey of about 8,000 of Delhi's factories. Later, the survey got scuttled. When asked, Jain pleaded ignorance about the survey and admitted that there still has to be a comprehensive inventory available on polluting industries in Delhi.

Although it is quite natural that the axe will fall upon industries located in non-conforming areas (residential and commercial zones), conforming areas seem to be going scot-free housing industrial units that are reportedly, exceeding all pollution standards. In fact, two years ago, a CII-CPCB review clearly stated that factories in industrial estates are operating beyond permissible water/air pollution limits. Even these have to be hauled up.

There is actually no 'inner agency' to check the erring industries, feel experts. The CPCB is only an 'outer agency'. N K Verma, senior environmental engineer, CPCB, told Down To Earth that very few factory inspectors have been submitting regular "clear-cut" reports to the authorities regarding the degree and kind of pollution caused by Delhi's factories. Most of these officials are either evasive or too overburdened, considering the gigantic growth of industry in the city. Also, so far there is no technological incentive announced by the government in terms of economics. Referring to this, justice J S Verma said, "The cost of polluting has always proved to be less than the cost of acquiring an environment-friendly technology. The erring factories know this. States which house the NCR areas, are clamouring for the Delhi government to foot the bill for the infrastructure after relocation and not take their own initiative."

This means that after relocation, the polluting industries will start dirtying the environs of the new areas where they set up plants. H Daur of the Hind Mazdoor Sabha says, "Although the factories have been asked to shift, no modernisation drive has been announced by anybody yet. Even if there is one, from where will the new skilled labourers come? Evidently, infrastructure has to be improved beyond road, transportation or electricity." And this also calls for safer health standards, he said.

Already, there are reports of protests and public meetings from Rajasthan and Uttar Pradesh, said Tarun Bose of the National Alliance for Peoples Movement- Delhi chapter (NAPM). "The people in places like Alwar are apprehensive that the units from Delhi will come to pollute their region. There have also been complaints of land-grabbing by units facing closure in Delhi," said Bose.

Regarding adhearance to clean standards, Verma says, "Actually, right now, the best option for us is site-specific relocation. This not only means that an industry which produces silicon should shift to where sand is found aplenty, but also that the degree of pollution by the unit has to be reduced by seeing whether it is water that should be more polluted in that site, or land or air, leaving out to safeguard whichever has been heavily polluted so far."

The 20-year old vexed issue has seen many evasive tactics. With factories mushrooming all over, suspected to be procuring permits from the MCD under the very nose of the CPCB, one has but to agree to what Jag Parvesh Chandra, leader of the Opposition, Delhi assembly once said, "Delhi is the mistress of many but the beloved of none."