Introns, which till recently were seen just as junk DNA, might be playing an important role in coding 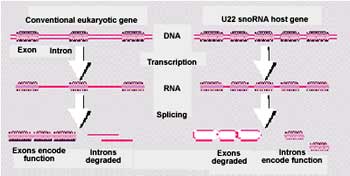 one of the principal discoveries of modern molecular biology has been that genes come in pieces. More precisely, in higher organisms, the sequence of dna that encodes a protein message corresponds to the protein called exons, interspersed with portions called introns. The introns are cut and removed between the production of an initial rna transcript and its packaging to give rise to a final message.

It is not clear why the information required to make a protein is spread over different segments of dna because many cases are known of genes occurring as single contiguous stretches in bacteria and other prokaryotes. One school of thought holds that introns are just 'junk', pieces of dna that have no functional role to play. However, other speculations suggest this junk dna, which, interestingly, constitutes a major fraction of the total dna, may also play a role of 'mutation absorber' or help in providing the spatial orientation for genetic activity.

A recent report by K T Tycowski and colleagues of the Yale University School of Medicine in the us adds to the growing weight of evidence that not all introns are functionless. They studied a gene -- the u22, present in both humans and mice -- which is known to encode an rna molecule instead of a protein. This gene has a large number of exons and introns; the introns are spliced out as the rna gets processed to give rise to (what is presumed to be) a functional message ( Nature , Vol 379).

The first clue that introns might be of some use came from the finding that when human and mouse genes were compared, their introns were much more similar to one another than their exons. On the other hand, the seven conserved u22 intron segments gave rise to small rna molecules that ended up in a part of the cell nucleus known as the nucleolus.

The nucleolus has an extremely important role: it is the site where one of the main actors in the process of protein synthesis, ribosomes, are assembled; ribosomes are giant molecular complexes consisting of ribosomal rna (rrna) and protein. In sum, the introns of the u22 gene give rise to a set of small neucleolar rnas (or sno rnas).

Strong circumstantial evidence suggests that these sno rnas serve as attachment sites to r rna as it is being made, and also to ribosomal proteins. The attachments appear to be used during the processing of r rna as well as for ribosomal protein assembly. What of the bulk of u22 rna, the portion that derives from the exons in the u22 gene? It seems most likely that it gets rapidly degraded.

Here then is a striking instance of the use to which so-called 'junk' dna might be put. These findings call into question simple-minded assessments of the relative importance of what we still refer to, perhaps erroneously, as coding and non-coding dna in a cell.