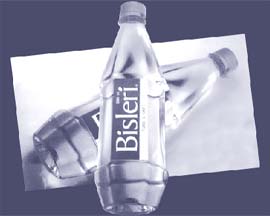 with no government regulations in place , until recently, the bottled water industry in India was totally unorganised. Any one could set up a bottling plant, fill bottles with tap water and sell it in the market. There was a big question mark on the quality of water.

This may not be anymore. With the government setting new standards and multinationals entering the fray, the industry is set to undergo a sea change. The current market leader continues to be Ramesh Chauhan's Parle Bisleri Limited, a 31-year-old brand synonymous with bottled water in India. But multinationals such as Pepsi Foods with Aquafina and Coca-Cola Limited with Kinley promise to give Bisleri a tough competition.

It is estimated that there are 250 different brands of bottled water in India. There are more than 2,000 bottling plants across the country. Till some three years ago, the value of the organised bottled water market in India was pegged around Rs 150 crore. Today, it has gone up to Rs 500 crore. Industry sources estimate that the market will grow at around 50 per cent per annum for at least seven to eight years. This they attribute to an increase in public awareness about water-borne diseases. A report by the Tamil Nadu-based Industrial and Technical Consultancy Organisation says that in 1999 the market grew at the rate of 70 per cent per annum. "As of now, urban areas account for the major share but if manufacturers are able to reach rural areas, the market can grow further," says Naginder Razdan, director (Delhi), Bisleri.

In India, so far there were no regulations on quality and sale of bottled water. Even if some specifications were made, they were not implemented. "This industry has been highly unorganised and there have been no quality checks," says A K Saxena, director (environment), National Productivity Council, New Delhi. This led to mushrooming of small time operators, including those filling used bottles in search for quick money. A World Health Organisation ( who ) fact sheet points out: "There have been reports of fraud in which ordinary tap water has been added to used mineral water bottles and sold as the original article." Only in September 2000 did the government come out with regulations to make Indian Standards Institute ( isi ) certification mandatory for all the bottled water manufacturers by March 29, 2001. It has notified that before this date every brand of bottled water in the market should have an isi certificate and a bold lapel mentioning whether it is 'packaged natural mineral water' or 'packaged drinking water' as defined by the Bureau of Indian Standards ( bis ). The recent notification is an amendment to the Prevention of Food Adulteration Rules, 1955.

It is defined as "water from any potable source, including public drinking water supply systems" subject to simple treatments like filtration, aeration and reverse osmosis ( ro ) to make it nearly free of microorganisms. Both 'packaged natural mineral water' and 'packaged drinking water' should carry an isi certificate. is -13428 will be applicable to packaged natural mineral water and is -14543 to packaged drinking water. It should be packaged in containers made either of glass or good quality plastic, which have to be certified. The government deadline of March 2001 has forced almost all players, including multinational and foreign brands, to make a beeline outside the bis headquarters in Delhi. The certification will be valid for a period of one year after which the product has to be evaluated again. So far, six companies have already been given the isi mark.

The bis definition saying natural mineral water will not be allowed to undergo any treatment besides filtration has also raised a new dilemma. If water undergoes treatments like reverse osmosis ( ro) , combination of filtration and ozonation, it will not be mineral water but packaged drinking water. In that case, many brands, which are currently sold as mineral water, will be called packaged drinking water after certification. For instance, Bisleri gets its water from an underground-protected source but the water is treated using processes like ro . After certification, it will be sold as drinking water. "It is necessary to study India's climatic conditions before deciding such specifications," says Razdan, adding: "We have to treat water from underground sources to make it fit for consumption and it is almost impossible to get absolutely clean mineral water." The notification also prohibits companies from making claims on the water's medicinal benefits. This may force Coca-Cola India to drop the Federation of Family Physicians Associations of India ( ffpai ) certification for its brand Kinley. "In India one can very easily fool the public because of the very little knowledge the general public has," says Saxena regarding the controversy. Down To Earth made several attempts to contact Coca-Cola India, but despite several reminders the company officials were elusive.

Manufacturers are also prohibited from using any statement or pictorial device that may create confusion in the minds of the public and mislead them about the nature, origin, composition and properties of packaged water.

The tight regulations, however, have not annoyed manufactures. Some of them have, in fact, welcomed the move. "It is a commendable step that was long overdue. It will benefit the consumer," says Deepak Jolly, executive vice-president, Pepsi Foods Limited. Agrees Razdan, "This is a good step for both manufacturers and consumers and will increase public awareness levels."


Gone are the days when travellers stopped at temple tanks called pyaou or large vessels kept at the roadsides to quench their thirst. Today, the maximum demand for bottled water comes from those who are travelling. "A majority of our customers are those who are on the move," says Razdan. In this mobile age, old companies are also changing their ways to reach out to the new. Bisleri, for one, has changed according to the market, which newer brands like the one launched by Pepsi threaten to take over.

bisleri: Bisleri is the undisputed market leader in the mineral water segment in India. But as there was no monitoring of this sector, the figures for market share differ. Some sources place the figure at 22 per cent, others at 40 per cent and still others at 70 per cent. "As the market is growing, we are looking forward to increasing our sales volume rather than market share," says Razdan, which according to him has been rising constantly.

Bisleri has an annual business turnover of Rs 200 crore and a production capacity of around 200,000 bottles per day. It has 15 bottling plants across the country and one in Nepal. All the bottling plants have in-house testing labs. "Daily testing is done for each batch that goes out," says Razdan. Besides, they get their product tested every month by a government-approved lab. "We are already following isi specifications," says Razdan. Bisleri was the first to launch the 500 millilitres, two litres and five litres bottles/jars during the last three years. This has opened up an entirely new segment for the bottled water market in India. "Some more new plants are coming up and we are also trying to increase production by adopting content packing," says Razdan. Some of the main features of Bisleri include a breakaway seal for the bottles so that refilling is not possible.

aquafina: Pespi Foods is a new entrant in the bottled water segment with its brand Aquafina. "It is the number one brand in the us with a market share of 11 per cent," says Jolly. So far, Pepsi has only set up one plant at Roha in Raigad district, Maharashtra, at the cost of some Rs 50 million. According to company sources construction of six plants, including the one at Bangalore, is underway and will be completed by 2001. So far, Aquafina is available in only 750 ml bottles, but the company says it will soon be available in 500 ml, 1 litre and 1.5 litres, too. Some of the major features of Aquafina are an international tamper-proof seal and two code prints of batch number and manufacturing date, one on the cap and one on the bottle. "Both have to be same so it leaves very little scope of refilling as it is too expensive for small time re-fillers to get a coding machine," says Jolly. The tamper proof sealed once opened cannot be made to look sealed again, says Jolly.

Aquafina's production process includes seven-stage distillation, which eliminates most of the bacteria, followed by ro and then ozonation. "We follow the same standards as our brand in the us ," says Jolly. Pepsi claims that, after a year of its launch, the company already accounts for 11 per cent of Mumbai's market share. The bottle is also of a high quality food grade bottle, which is better than other brands, claims Jolly.