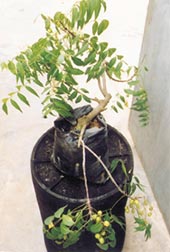 even as China witnesses a 'neem revolution', India is about to lose a huge market in this indigenous product. Neem (Azadirachta indica) plantations have grown by leaps and bounds in China. The country has planted 14 million neem trees in Yunann province and has also done experimental plantings in Hainan, Guangdong and Sichuan provinces.

China's decision to market neem as a biopesticide has stemmed from a few setbacks it faced in recent years. Chinese shipments of fruits and vegetables were rejected as they were found to contain pesticide residues. This prompted China to grow neem and to develop it into a biopesticide industry.

India will bear the brunt of this development. With around 25 million neem trees, India should have been the most likely candidate to reap profits worth us $500 million from the global biopesticide market. While the Chinese programme is being strongly supported by the government and industry, India lacks support from all sectors in promotion of the neem industry. Despite the fact that it could be a sound proposition, official apathy and the lack of a suitable programme have impeded the growth of this industry in India. "If we do not wake up quickly, China is likely to take over the biopesticide market in the next five years," says Ramesh Saxena, former head of the Integrated Pest Management Section at the International Centre of Insect Physiology and Ecology, Kenya.

Though the Union ministry of small-scale industries and agro and rural industries has tried to promote neem as part of its rural employment generation programme, a laidback approach has led to its failure. Even subsidy is given only on value-addition endeavours.

"Promoting the biopesticide industry would ensure that India is part of the global market," feels A K Raheja, former coordinator of the National Agriculture Technology Project of the Indian Council of Agricultural Research. But unless the government takes the initiative, the industry is unlikely to recover lost ground.