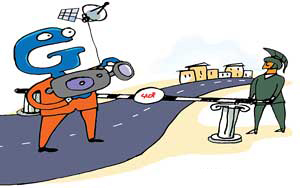 Google faces roadblocks in Greece. The country's data protection agency has banned Google from expanding its Street View service, pending "additional information" from the firm. Street View gives users a 360-degree view of a road via Google Maps. Authorities want to know how long the images would be kept on Google's database and what measures it will take to make people aware of privacy rights.

Google representatives said the firm had not seen the full details of the The Hellenic Data Protection Authority's request, but had taken steps to protect people's privacy. "We have put in place a number of features, including the blurring of faces and licence plates, to ensure that Street View will respect local norms," they said.

First launched in the US two years ago, Street View now covers nine countries and Google wants to expand the service to cover all of Europe. Users zoom in to a given location in Google Maps, and then drag an icon above the zoom bar to get a picture view of a street.

The director of the UK-based privacy watchdog Privacy International, Simon Davies, said the Greek decision would set a precedent.