Not quite the pulse of the nation 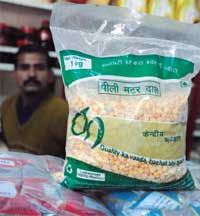 In order to counter spiralling pulse prices, the Union government is supplying imported yellow pea at one-third the market price of popular pulses. Six months ago, when pulse prices looked like increasing, grain traders as well as the government saw an opportunity in importing yellow peas from Canada, where it is cheap because it is grown for fodder. It is being pushed through a consumer awareness advertising campaign at the rate of Rs 26 a kg.

“Canada had a bumper crop and the produce was available cheap. Pulse prices in India were expected to soar because of lower pulse production last year so the government thought of importing yellow pea,” said Rajesh Gupta of Makhan Lal Suresh Kumar Bros in Naya Bazaar, Delhi’s wholesale pulse market.

Stocks are lying at Thoothukudi, Mumbai and Kolkata ports. Usually, traders buy yellow pea to mix its flour in besan (chickpea flour). This is the first time government is marketing it as a staple pulse. This has drawn criticism.

Bad government policies are responsible for increasing pulse prices, said G V Ramanjaneyulu, scientist and executive director of the non-profit, Centre for Sustainable Agriculture. He said the government has not supported pulse farmers with the right prices and has ignored rainfed agriculture—pulses are grown in drylands. With a little push, India can produce all the pulses it needs, he said.

Government sources claim the pulse has caught on with the consumers. “It looks like red gram after processing. We have supplied 184 tonnes of yellow pea since December 2009 to Mother Dairy and Kendriya Bhandar…it is selling well,” said P K Jain, general manager of consumer marketing at the National Agricultural Co-operative Marketing Federation of India (nafed), the government importer. nafed has written to the food secretaries of all states to introduce yellow pea in their markets. “Only West Bengal seems interested right now. We are also trying to introduce it through the public distribution system,” he said, adding nafed has plans to import more to lower the prices further.

Veena Shatrughna, a nutritionist formerly with the National Institute of Nutrition in Hyderabad, said all pulses have about 20 per cent protein and similar qualities, so one is not all that better than the other. “Culturally people are used to a particular diet, so they do not have the enzymes to digest something new and that’s why yellow pea is causing flatulence in consumers.

The timing of the government’s price suppressing moves is also under question, because the winter pulse crop is around the corner. Lower prices would further discourage pulse farmers. The money spent on import could’ve been given as an incentive to needy pulse farmers, Ramanjaneyulu said.

Traders are expecting a good winter crop of pulses because the area under pulses increased from 9.6 million hectares (ha) in October 2008 to 10.1 million ha in October 2009. More farmers sowed pulses instead of paddy because of the poor monsoon. In the first half of January, wholesale prices of black gram and red gram decreased about Rs 1,000 per quintal, he said. But even when the wholesale rate of red gram was Rs 41 per kg in January, it was selling in the market for above Rs 70 per kg. Pradeep Jindal, a pulse trader in Naya Bazaar, said, “Even if the pulses are expensive, farmers do not get a good price. It is only the retailers who are benefiting.”