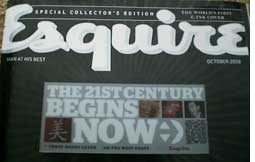 US magazine Esquire's special 75 th edition of e-magazine might not revolutionize the print media as much as it was hoped for. Using the same e ink technology for the cover and an advertisement that Amazon used for its Kindle e-book, the magazine includes a panel flashing the message 'The 21st Century Begins Now' on the cover of its October issue.

The cover has been designed to reveal/conceal text in reversible backgrounds of black, white and grey along with illustrations that can blink on and off, thanks to a technology of micro-capsules of ink controlled by an electronic battery, developed in China. The result however, is not impressive. The whole cover feels unusually thick; the batteries will last for 8-9 months only and cannot be re-used. Moreover, users would have to pay us $6 instead of the regular us $4 cover price for it.

Esquire editor, David Granger is, however, hopeful for further improvement and says that Esquire plans to implement a second e ink design early next year and gradually get down to publishing the entire magazine in the E Ink format in the coming years.