Ecosystems that were expected to revive after power plants were ordered to clean up their act, have not done so 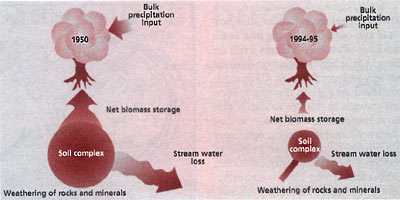 the solution for redeeming the damage done by acid rain seemed so simple -- cutting sulphur emissions from power plants to see the environment spring back to life. But nature seems to have a mind of its own. It has been over two decades now since Western nations cracked down on sulphur-emitting power plants, compelling them to clean up their act. But the ecosystems which had borne the ravages caused by acid rain, have failed to recover as was expected. According to scientists, the soil has suffered to such a great extent that the ecosystem has failed to recover ( Science, Vol 272, No 5259).

Analysing the data of over 30 years from a New Hampshire forest, ecologists Gene Likens and Donald Buso of the Institute of Ecosystem Studies in Milbrook and environmental engineer Charles Driscoll of Syracuse University, (both located in New York, us), report that acid rain has leached vast quantities of base mineral ions essential for plant growth and neutralising acids. They found that the rate of depletion of these ions is high, even today. Going by their reports, the devastated ecosystems would take a very long time to regain their health again. "Soils take hundreds of thousands of years to develop. If their chemistry is changed dramatically, it will create a major impact and take a long time to recover," says Likens, the team's leader.

Although scientists had for some time been suspecting the extensive damage to the soil, the New Hampshire study is the "first case of a documentation of the ecosystem on the subject, which does not make it a hypothesis anymore", says David Schindler of the University of Alberta in Edmonton, Canada. The implications of this paper seem very clear -- sulphur reductions will not be enough for ecosystems to recover.

The reason for the earlier belief that the acid rain problem will soon be solved, lay in the fact that soils were thought to be well-buffered and hence capable of shielding serious problems. According to the data collected, vegetation in the us Forest Service's Hubbard Brook Experimental Forest in New Hampshire's White Mountains, has nearly stopped growing since 1987, and the p h level of the waterbodies in the area remains below the normal level. These changes indicate that after years of acid deposition, the supply of exchangeable calcium and magnesium ions in the soil is low.

This drop in calcium and magnesium levels in the soil has been recorded by researchers at Hubbard Brook since 1970. But the team has noticed even more alarming signs in the long-term records of the chemistry of the forest's streams. Lower levels of sulphate (a pointer for acid rain) have been found in the stream water since 1970, as industrial pollution fell. Although this was an expected outcome of the measures taken to curb pollution, what was unexpected was the drop in the levels of calcium -- the main base cation (positive ion) in the stream waters. The explanations offered for the fall are the cuts in emission, resulting in the drop of calcium-rich soot and the simple fact that years of acid deposition have simply leached away the reserves of calcium in the soil. To test the hypothesis, the scientists calculated the total amount of calcium found in the area, by adding the calcium contributed by the breakdown of rocks to the measured amount of calcium which the scientists added to the environment, in the form of precipitation. From the amount derived they subtracted that which was absorbed by trees and the quantity carried away by stream water. The final figure arrived at gave them the rate at which the region had lost its calcium deposits. The decrease seems to have intensified after 1965, as the effect of acid rain began to be felt more than ever before. On comparing the data over time, they discovered that in the last 45 years, calcium reserves in the forest's soil had reduced by more than 50 per cent. On extrapolation the team found that while the rate of loss had gone down in the last few years, addition from mineral breakdown will not replenish the pool to the pre-industrial levels. This means that till the end of the 21st century, ecosystems will remain vulnerable to the problem.

According to Dave Grigal, a soil scientist at the University of Minnesota, spreading lime on the soil may be a solution, but that can be expensive and lead to other ecological problems ( Down To Earth , Vol 4, No 25). Grigal rightly says, "There is no quick fix."