Not testing the waters 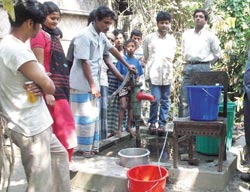 victims of arsenic poisoning in Bangladesh have taken the British Geological Survey (bgs) to court. They contend that bgs did not test for arsenic in the water of wells funded by a project which had partners such as the United Nations Children's Fund (unicef) and the World Bank from 1983 to 1992. Consequently, they unknowingly consumed water containing arsenic over a long period. A part of the money for digging these wells was given by the uk and the expertise for the project was provided by bgs.

"The case is a warning for different donor agencies, which embark on programmes in developing countries without understanding the long-term effects of such plans," says Quazi Quamruzzaman, chairperson of Dhaka Community Hospital, which has filed the case in the High Court in London, along with the victims.

bgs, however, denies the allegations. According to a spokesperson from the Natural Environment Research Council (nerc) -- the parent body of bgs -- since the presence of arsenic in the area was not known during the period in question, they cannot be blamed for the poisoning cases.

But experts refute these claims. Arsenic specialist and director, School of Environmental Studies, Jadavpur University, Kolkata, Dipankar Chakraborti says that the presence of the contaminant in river basins of the region was known even in 1984. He points out that research papers on the presence of arsenic were published in well-known journals such as the World Health Organisation (who) and The Lancet. " bgs analysed arsenic in 1989 in uk's aquifers, but it did not bother to do so in Bangladesh in 1992," alleges Chakraborti.

The government of Bangladesh has, meanwhile, remained neutral in the entire episode. "We had informed the government about the possibility of arsenic poisoning, but to date no action has been taken," reveals A Atiq Rahman, executive director of Bangladesh Centre for Advanced Studies, Dhaka.