Not virtual, it's reality

Scientists in Austria have achieved success in teleporting a photon 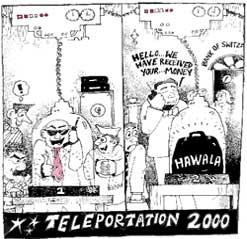 the dream of science-fiction writers that an object could vanish at one place and reappear instantaneously at another, seems to have come true. Scientists have been able to demonstrate a form of teleportation in a tabletop experiment. Teleporation is a process in which an object disintegrates in one place and reassembles in another. Anton Zeilinger and his colleagues at the University of Innsbruck, Austria, caused a photon (a particle of light) to disappear at one point and reappear instantly at another point a few metres away.

The process did not require any physical connection or form of communication between the two points. After this achievement, researchers now wonder whether the technique could also be applied to teleport objects as observed on Captain Kirk's starship "Enterprise" in Star Trek.

Charles Bennett, one of the six theorists who predicted the teleportation effect four years ago, however, says that it would be extremely difficult to teleport even an object as small as a bacterium. But Zeilinger is hopeful that the process could be used to develop large sophisticated "quantum computers" and encrypting messages. Encrypting is a process to convert messages into codes in order to prevent unauthorised access.

The researchers teleported a quantum state of one photon to another. To be more specific, they teleported a particular portion of photon. Photon possesses dual properties as it can be in wave form and also in particle form. The method employed by the researchers to teleport the photon was based on two characteristics of quantum mechanics -- the rules that govern the behaviour of matter and energy on smallest scales. It is known that objects such as subatomic particles do not have specific, fixed characteristics at any given time.

These particles exist in the form of wave-like vapour of superimposed probabilities that have particular positions or momentum. They do not show any definite property, unless they are measured. So when the particle is measured, it collapses suddenly into one set of values while ensuring that the quantum state of the particle is teleported rather than simply copied.

The other characteristic of quantum mechanics is that the teleportation of a quantum state depends on a property known as 'entanglement'. When a matched pair of photons is generated in a certain way adopting a particular process, they are 'entangled'. It means that if one photon is observed, then it will instantly change the quantum state of the other, even if the two particles are separated by an arbitrary distance. Usually, the system is known to work with separations of up to 10 km.

This phenomenon could be employed to trap the quantum states of rapidly decaying particles in some more stable system. The method could also be used to transfer quantum states from place to place even over very noisy communication channels. Theoretically, quantum teleportation is always possible with pairs of entangled atoms, or entangled photons with atoms, or ions, or other particles.