Nothing gained, but nothing lost either

The glitz at UNCED was very impressive -- over 100 heads of government gathered together to thrash out environment politics. But the results were disappointing 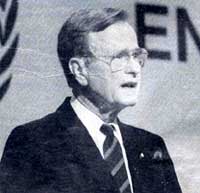 THE RECENTLY-concluded Rio conference has clearly shown that environment is now an intensely political issue with numerous contending groups of nations and peoples.

The conference, known as the UN Conference on Environment and Development (UNCED), was a grand 12-day affair with over 100 heads of government present. The list was impressive, with all the leaders of the powerful Group of Seven industrialised countries, except Japan's Kiichi Miyazawa, present. The conference, which took two years of preparation and cost a few hundred million dollars to put together, had as its agenda the resolution of the world's environmental problems.

The result left most disappointed. The secretary general of the conference, Maurice Strong, said, "We got an agreement without commitment" -- an agreement for sustainable development, but very little money in the kitty.

The conference became what the world's leaders made it: a reflection of their own contending interests at play.

The strongest element of this play was the extreme isolation of the US. This was because its leadership had decided that it would not sign the biodiversity convention. And it used every possible pressure to dilute the climate treaty by insisting that it would not agree to any binding targets for controlling its emissions.

The BBC, broadcasting at the end of the conference, said George Bush was singularly responsible for the failure of the meeting. NGOs -- not known for their diplomacy -- took to the streets with angry banners. One person even carried a rope, "to hang Bush", he said. But Bush, who attended the meeting, said that "he had not come to apologise". And that he was the president of the US and not the world.

American self-interest had been aroused. Its powerful coal lobby, already under pressure from the powerful economies of Europe and Japan, fears that any effort to reduce emissions could hit it adversely. Defending his decision not to sign the biodiversity convention, Bush said that the convention would hurt jobs in the US. He was referring probably to the impact the convention provisions would have on the biotechnology industry as it would have to share its benefits with the countries who gave it genetic material.

In many ways, the conference became an indictment of the American way of life. Ernst U von Weizsacker, an eminent German economist, said, "30,000 people were attending the funeral of the American dream." US senator Larry Pressler called the Earth Summit a meeting of "the international left".

A lot of what happened, or did not happen in Rio, was because 1992 is election year in the US, when all politicians succumb to powerful pressure groups. The chairperson of the main committee of UNCED, Tommy Koh of Singapore, said that the UN should now remember not to organise a world conference in a US election year.

With the US hogging the news, the Europeans and the Japanese easily took the back seat. They could do little and still avoid the limelight. The Germans, were tight-fisted when it came to giving money, saying that they had commitments in East Germany. The Japanese commitments were much below expectations. They were clearly trying hard not to outdo the US and so embarrass Bush.

Many of these countries did try hard to help the US save face, especially on the question of the forest convention (See story: Forests of Global Contention). The Europeans mounted enormous pressure on the South to globalise its forests. This became the big battle of the conference. Getting the idea squashed was the South's one lone victory.

But their own house was not in order with disunity among the member-countries of the G-77. The clearest faction was the oil-producers led by Saudi Arabia. These countries, threatened by curbs on oil consumption, got easily swayed by the idea that a forest convention would focus on saving the sinks -- forests absorb carbon dioxide -- and not on oil, a major source of carbon emissions.

The Africans, as a group, were very keen to get a convention on desertification. But northern countries wanted their pound of flesh -- their support -- in return for the forest convention. But this was not to be as the Africans held firm.

Another major block was the former Soviet Union and the Eastern Europeans. With devastated economies and environments, these countries vied with the South for a slice of the aid cake. Their battle in UNCED was to establish themselves as a distinct group, namely, 'economies under transition' and to be included in the aid booty together with the G-77. Otherwise, they came with a one-point brief: "Support the US".

For the South, as a whole, UNCED showed up the failure of its own strategy. These countries had gone with the intention of seeking reparation from their rich counterparts for the damages caused to the world's environment. But they came back with nothing and looking less moral to boot. The North simply dismissed them as a penurious bunch, pulling at its purse-strings. Ironically, it was the US which handed them the platform of morality on a platter, with its leadership determined to become the most immoral of the class that attended Rio 1992. So the South left Rio with nothing gained, but also nothing lost.