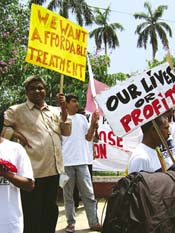 An ongoing case in Madras High Court has brought forth a damning revelation: the Indian government remains confused about its patent laws and the latter are now under threat. A May 2006 petition filed by Novartis, the pharmaceutical multinational, has sought changes in India's patent laws. Potent enough to restrict access to affordable medicines in developing countries, the case is pointer to the messy cluster of laws in the country's pharmaceutical sector.

In January 2006, India's patent office rejected a patent request for its cancer drug Gleevec. The Swiss firm had applied for patent sanction for a crystalline version of Gleevec, claiming the drug was an innovation. In existing Indian patent law, patents can be granted only to substantial innovations or completely new products. Gleevec is used to treat blood cancer patients.

While government slumbers, another front has opened up in the battle between civil society organisations and pharmaceutical mncs over access to generics. For instance, Cancer Patient Aid Association of India, a Mumbai-based non-governmental organisation, had filed a pre-grant opposition with the patent office in Chennai to ensure access to the generic version of Gleevec. Similarly, in March 2006, the Indian Network for People Living with hiv/aids (inp+) filed a pre-grant opposition against a patent claim for a fixed-dose combination of zidovudine and lamivudine by GlaxoSmithKline. The patent was for a simple combination of two existing drugs, which the company claimed was an innovation. Thus, the verdict in the Novartis case will crucially affect a decision on this patent.

What in the Indian patent law has Novartis challenged? In May 2006, Novartis said parts of the Indian Patents Act, which restricted patents on old medicines, were not compliant with World Trade Organisation (wto) rules, which India is party to.

The company singled out section 3d, by which already known drugs are not given patents. This provision enables Indian generic manufacturers produce copies of drugs and sell them at affordable prices; today, India is a major player in the generic medicines scenario in the world. In contrast, in countries Novartis has obtained a patent on Gleevec, the drug is sold at us$ 2,600 per patient per month. Many Indian companies produce a generic form of the Gleevec and sell it for a tenth of the price it is sold in the us.

"Gleevec has been awarded a patent for the beta crystal form in 36 other countries, including China. That Gleevec failed the Indian test for patentability indicates the problems in India's patent system," says the company's website in its comments on the Gleevec case.

Civil society counters this argument. "The case is just a ploy to create confusion on patent systems in developing countries," says Leena Menghaney of the Delhi office of Mdecins Sans Frontires (msf), a global medical humanitarian organisation. msf has launched an international campaign, urging Novartis to drop the case. Since drugs are available at affordable rates in India, many global agencies including unicef rely on it. The Novartis case could remove this ground from beneath their feet. "If the patent laws are relaxed or changed, it will hit drug dealings in the developing world in a big way," says Menghaney.

Civil society's discontent on the Novartis case is logical.If a conflict of interest arises, only governments can forward complaints to the wto panel, which takes care of such objections on patent laws. Pharmaceutical companies have to resort to local level efforts since they have no say in wto. The Trade Related Intellectual Property Rights (trips) agreement obliges all wto countries to safeguard patents on medicines; provisions in it adequately enable member nations tailor patent rules to their own public health demands. According to provisions in trips and also in the Indian Patents Act, during an epidemic, a government can issue licence to a generic medicine producer to meet the need. This is called a compulsory licence, which the patent holder can't object to.


Organisations like inp+, People's Health Movement, Centre for Trade and Development and msf have asked Novartis to cease its legal action in India. They have even launched a signature campaign. "Novartis is trying to shut down the pharmacy of the developing world," says Unni Karunakara, medical director of msf 's Campaign for Access to Essential Medicines in Delhi. "Indian drugs form the backbone of our aids programmes in which 80,000 people in over 30 countries receive treatment.

We cannot let Novartis turn off the tap," adds Karunakara. inp+ also wrote to the prime minister on January 24, 2007, requesting the solicitor general of India be given the responsibility of the case.

In that letter, it was shown Novartis' tactics were not new. In February 1998, the company, along with 38 other corporate comrades, took the South African government to court to prevent it from importing cheaper aids medicines. Here, the bone of contention was the country's Medicines and Related Substances Act, which allowed for compulsory licenses and parallel import of medicines to South Africa, in violation of patent rights.

The companies cried foul for they found the law gnawing at their market interests. Although the group withdrew the case in April 2001--owing to mounting pressure from civil society--the case had taken its toll on South Africa's health system, causing thousands of aids patients to die.

"We do not wish to share the same fate. It is the moral obligation of the government to protect the legislation that affects access to drugs," says Loon Gangte, president, Delhi Network of Positive People and part of inp+. The group is yet to receive any response from the government.


Can the Patents (Amendment) Bill, 2005, and the National Pharmaceutical policy, 2006, (see box: Hazy provisions) provide a way out? The former was introduced to make the patents act compatible with India's international obligations under trips. At that time, doubts were cast over provisions on whether the country was trips- compliant in its rules on patents. There was confusion whether it would be trips- compliant to give patents only to new products. To clear the ambiguities inherent in the patent laws, a technical expert group headed by R A Mashelkar, former director of csir, was set up in April 5, 2005.

The Mashelkar committee submitted its report to the union ministry of commerce and industry on December 29, 2006. The committee concluded that "it would not be trips-compliant to limit granting of patents for pharmaceutical substances to new chemical entities only". Objects S Srinivasan, Locost-Shishu Milap Sahaj-a Vadodara based ngo promoting cheaper drugs, "The report is speaking out for the big pharma-industry. It is indeed trips compliant to grant patents only to new chemical entities." The Indian generic industry is also up in arms against the committee's recommendations. The Indian Pharmaceutical Alliance, Mumbai, has written to the Centre to reject the report.

The Mashelkar report, and uncertainty in regulations, could veer the Novartis case off the generics pitch. If the committee's recommendations are applied, Gleevec becomes an innovation, not a combination. When the case was last heard on in January 29, Novartis relied on the report to make their point by sleight of hand: they had singled out 3d, but the committee was not supposed to evaluate this provision. Also, the report has not yet been adopted and slotted into any legislation.

The fact is that the patent maze still remains as perplexing as it has been. One can only hope that when the next hearing of the case, scheduled February 15, is held, clarity will get a fresh start.