They can be potential drug carriers 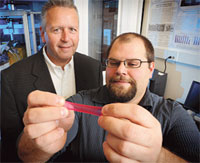 BLOOD shortage in India leaves patients suffering from rare disorders in a lurch. For instance, the Central Blood Bank in Kolkata, needs around 750,000 units of blood per year and the requirement in West Bengal varies from 50,000 to 60,000 units per month. During summer and festivals, the blood bank receives less than 45 per cent of the requirement.

In Delhi also the number of donors reduces in summers. In the past many scientists tried to create artificial blood but failed to mimic the properties of red blood cells (RBCs), especially their flexibility. Now scientists from University of North Carolina, US, made synthetic blood cells using a technology called PRINT (Particle Replication in Non-wetting Templates).

Using this technology, they created hydrogel particles that mimic RBC properties, allowing them to circulate in the body for longer periods, which are crucial for their functioning, and are flexible like them.

RBCs survive for 100-120 days. With age, RBCs become stiff and get removed from the body. As described in the study published in PNAS on January 10, scientists tested hydrogel particles of varying sizes and flexibility in mice. The flexible particles lasted 30 times longer than the stiffer ones.

Their ability to circulate longer would make them useful to carry drugs that require slow release in the body and to act as an imaging agent. For instance, they can locate small tumour cells that have migrated inside the body using Magnetic Resonance Imaging.

Scientists are yet to test the particles’ oxygen-carrying capacity. The technology may not solve blood shortage but it is a big step in the same direction.