Climate change affects breeding patterns of cows in the UK 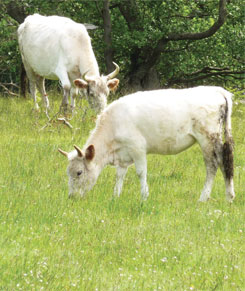 IN 1860, Charles Darwin encouraged cattle owners to maintain data on a special breed of cows living in Northumberland county, northern England. Little did he know that 151 years later these records, which included births and deaths, would provide evidence of how climate change is affecting breeding patterns in Chillingham wild cattle.

With their white coats and red ears, Chillingham cattle roam freely in the grounds of Chillingham Castle in Northumberland. The cattle—once domesticated but now kept wild (feral)—are special because they give birth throughout the year.

Scientists from the Centre for Ecology and Hydrology, Biomathematics and Statistics in Scotland and the University of Lincoln in the UK have found the Chillingham wild cattle, currently 93 in number, are conceiving more in the warmer spring months, leading to more births in the winter. “The springs are getting increasingly warmer,” explains lead author Sarah Burthe from the Centre. She adds, this allows early growth of vegetation, providing the cattle with nutritious plant growth. The cows which conceive at this time give birth nine months later in the winters. More calves being born in the winter is bad news because winter babies are less likely to survive their first year, claims the research team.

The study, one of the first to show biological changes in a year-round breeder, has been published in the June issue of British Ecological Society's Journal of Animal Ecology. Last year, a research found that soay sheep (primitive breed of domestic sheep) in Scotland are reducing in size as a result of warmer temperatures. Milder winters help smaller sheep to survive and breed. In turn they produce smaller offsprings, says the study published in the Science journal.

Independent wildlife researcher Jake Gratten from University of Sheffield in the UK confirms that rising global temperature is affecting feral animals. “We now need to study how climate change is affecting animals that are seasonal breeders.”