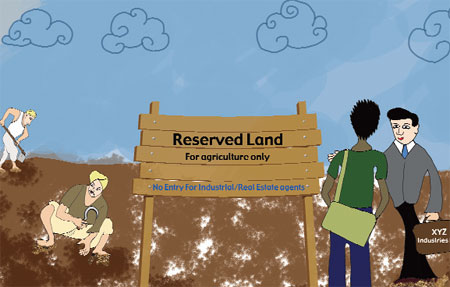 AMID countrywide agitations over land acquisition and growing food security concerns, the Ministry of Rural Development and Panchayati Raj is considering reserving land for agriculture. The ministry has suggested a bill that would make it mandatory for all states to declare the most fertile land (or category I agricultural land) as reserved agricultural zone, which cannot be diverted for any other use.

The reserved zone would not exceed 40 to 50 per cent of the existing net sown area and include multi-cropped land. The remaining agricultural land, which could also include category I land, would be sub-categorised for grazing, rural housing and agro-based activities. “To conserve the fertility of the zone, no polluting industry would be allowed in its vicinity,” adds Anita Choudhary, secretary of the Department of Land Resources in the Union rural development ministry. She was giving the details of the bill at a workshop on country and town planning and national land use policy held recently in Delhi.

The proposed bill is also likely to reserve land outside the reserved agricultural zone for rehabilitation of people affected by irrigation projects.

The bill suggests all kinds of land should be categorised into zones such as regulated zones in municipal areas, natural conservation or forest areas, water bodies and industrial zones.

The bill is likely to have a provision which would allow land use to be revised once in 10 years.

Neeraj K Srivastava, deputy secretary of the Department of Land Resources, says land is being developed in a haphazard manner across the country. Food security is also a concern. Estimates show there would be a shortage of over 100 million tonnes of foodgrain as against the requirement of 307 million tonnes by 2020. “We are looking at ways of making development of land and agriculture planned and regulated,” says Srivastava (see ‘Road to disaster’, Down To Earth, June 1-15, 2011).

Land use cannot be categorised

Activists fear the proposed bill could lead to problems if key issues are not addressed right at the start.

C R Bijoy, environmental lawyer in Coimbatore, says land and agriculture are state subjects. The Centre cannot legislate on the subjects unless states request them to do so. “The rural ministry can prepare a model bill for the states to adopt—but from past experience we know how that goes. Look at the Groundwater (Control & Regulation) Act. It was legislated in 1970 and circulated repeatedly to all states and union territories. But till date only Andhra Pradesh, Goa, Tamil Nadu, Lakshadweep and Kerala have adopted it.”

Praveen Jha, associate professor with the Centre for Economic studies and Planning at Jawaharlal Nehru University in Delhi, thinks the bill is vague. “Land use cannot be mechanically categorised. There is always the likelihood of change in land use due to natural and man-made interventions,” he says. Over a period of time land may become acidic or alkaline. The land use has to be dynamic according to its condition, adds Jha. He advocates including gram sabhas and other grassroots-level bodies in deciding on matters of land and agriculture. “We need democratic and transparent processes at grassroots level.” Bijoy, agrees but, cautions that despite giving powers to gram sabhas, states sometimes override their decisions, just like in the case of the Forest Rights Act (FRA) where the government takes most of the decisions instead of delegating powers to forest dwellers.
News News News Soil Capability Ministry Of Rural … Legislation Land Use Land Acquisition India Gram Sabhas Agriculture
Donate Now