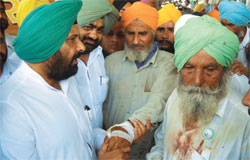 A FARMER was killed and about 30 were injured on August 2 when police lathicharged farmers opposing land acquisition by the state for a power project in Punjab’s Mansa district. Private company Indiabulls Power Limited is planning to set up a 1,320 MW thermal power project on 357 hectares (ha) belonging to four villages.

Mansa senior superintendent of police claims the deceased could have died of natural reasons. But Bhartiya Kisan Union (Dakunda) leader Ram Singh rubbishes the claim. “Seventeen farmer unions had decided to protest against the land acquisition on August 2,” he says.

Around 1,000 farmers gathered at a gurdwara on the Barnala district-Mansa border, about 30 km from Gobindpura village. “When we tried to march towards Gobindpura, the police attacked the farmers. And the deceased died because of the lathicharge,” he alleges. Of the 357 ha, farmers owning 67 ha are objecting to the acquisition process. They have even refused to accept the compensation offered by the state as they want to continue farming.

Rhudhu Singh of Punjab Kisan Union, one of the protesting organisations, says, “Our demand is simple. Take the land of the farmers who are ready to sell but leave this 67 ha.” Ram Singh says the farmers’ agitation has been going on since the past eight months when the government issued notification for the land acquisition.

“The district administration and the state had promised farmers several times that they will not take the land if farmers are not ready to part with it,” adds Singh, who was arrested by the police during the clash. Despite repeated attempts, Indiabulls and Mansa deputy commissioner Ravinder Singh could not be contacted for their comments.