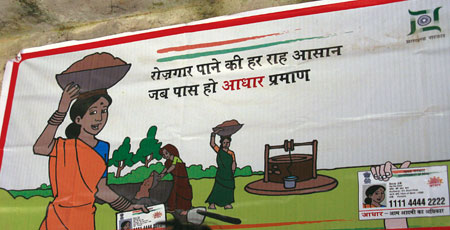 OVER 2.5 crore job card holders registered under Mahatama Gandhi National Rural Employment Act (MGNREGA) could be affected by the rural development ministry’s decision to introduce biometrics to the scheme.

The job cards of beneficiaries in 200 districts across India are set to expire in 2011. The process of job card renewal under the biometric system would take six months to two years. This would deny the registered people 100 days of guaranteed work.

Under the Rs 2,162-crore public private partnership biometrics project, the ministry would appoint a service provider in each state. The provider would collect information like name, photograph, address and bank account and biometric details like fingerprints, iris scan of the card holders. Besides, the provider will also lend technological support like machinery and software for the project at the worksites.

The ministry claims it will overcome drawbacks of MGNREGA like fake job cards and ghost beneficiaries through this project and cover 52.8 million rural households within 6.5 to 13 years. “The ministry has made the MGNREGA enrolment process compliant with Unique Identification Authority of India (UIDAI). It is a time-consuming process and would disrupt the employment programme,” said Reetika Khera, development economist at Delhi University. Supporting her, Nikhil Dey of Mazdoor Kisan Shakti Sangathan, a non-profit, said the proposal to introduce biometric attendance at the worksite with GPS coordinates is “impractical”.

Many MGNREGA worksites are in remote areas with poor or no connectivity. “Does that mean such worksites will close down?” he questioned. He added that activists are signing a petition against the imposition of UID on MGNREGA that would soon be submitted to the ministry.

Ritesh Saxena, project consultant for biometrics with the rural development ministry, said implementation of the project would not take too long. “As far as linking UID with MGNREGA is concerned, we are just following the parameters laid by UIDAI for the biometrics project,” he added.

Speaking at a lecture organised by Editor’s Guild on December 2, UIDAI chairperson Nandan Nilekani said, “I assure that using UID number for MGNREGA would solve the problem of assured cash transfer.” At present, the beneficiaries go to the post offices or banks to get money, but with UID collaboration they would get money from the agent appointed in their village by authenticating their identity online.”