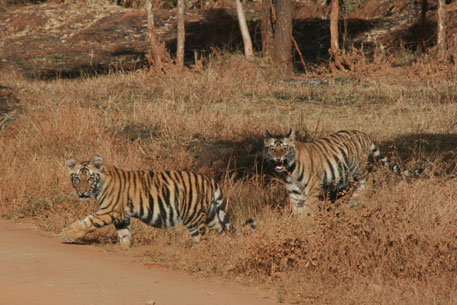 A deadly virus appears to be stalking the endangered tiger population in the country. In view of the threat from a deadly canine distemper virus, the National Tiger Conservation Authority (NTCA) has issued an “urgent” letter to chief wildlife wardens of all tiger ranges in the country. The letter issued on January 13 asks the wardens to launch a special drive with veterinary departments of the state to deal with the problem.

The virus, which is common among dogs, spreads to carnivores when the latter comes in contact or eats infected dogs. According to NTCA, the disease is incurable. It causes high fever, watery eyes, lethargy, paralysis and death. The infected animals have also been observed to display strange behaviour with disorientation, inability to predate, besides loss of fear, says NTCA.

Media reports quoted Rajesh Gopal, member secretary of NTCA, saying that in the past year the canine distemper virus has killed at least four tigers and several other animals across northern and eastern India. Gopal has advised the wardens to create a barrier through prophylactic immunisation of dogs in the buffer area of tiger reserves. NTCA has also directed that blood and tissue samples of the dead tigers should be collected to carry out test for the virus.

A K Sharma, head scientist at the Indian Veterinary Research Institute which has conducted the tests for the virus, told media, “These are disturbing finds. The cases were quite distant from each other. Some from an area where there are no dogs. So it appears the virus is spreading.”