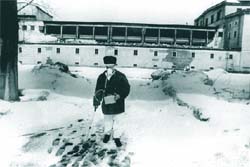 alarming levels of radioactivity have been detected in two rivers near the Siberian Chemical Complex, Russia's largest nuclear site, according to a usa nuclear watchdog group.

The Government Accountability Project said that more than enough radioactivity to meet the world's electrical power demand had been found in the Tom and Romashka rivers. "This pollution is probably the largest ongoing discharge of radioactivity in the world," said Norm Buske, a physicist and oceanographer with the project.

Till date, the Russian government has not made any public announcement about the contamination nor has it taken any action to clean up the river. "It's a huge secret out of control," Buske said. Both rivers run near the 40-year-old nuclear complex, which once developed top secret weapons for the former Soviet Union.