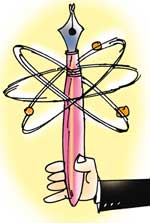 On which side of the 'new' nuclear divide you stand? The influential nuclear agenda pushers in India were forced to take stand, with a high-pitched battle erupting in the Indian media with regard to the much-touted Indo- us civilian nuclear deal in the first week of February.

The us negotiators who are pushing India to an agreeable list of separated civilian and military nuclear facilities before us president George Bush's visit to India next month, may be "surprised" (or perhaps not) to find an ally in The Indian Express which unleashed an all-out war on the department of atomic energy (dae), a sour thumb, according to the newspaper, preventing Washington and Delhi shaking the hands on the bilateral nuclear deal. Coming to the rescue of the much-maligned dae, is The Hindu newspaper which has been liberal in offering editorial space for those experts who smell a rat in the deal. Significantly, the dae -bashing in a section of the media broke out suddenly after us ambassador to India David Mulford's ill-timed public assertions on the issue and linking it to other sensitive issues of international diplomacy such as Iran nuclear issue. Mulford's comments (which were of course later dismissed as been quoted out of context), gave embarrassing moments to the Manmohan Singh regime with parties on the either end of the political spectrum strongly reacting to it.